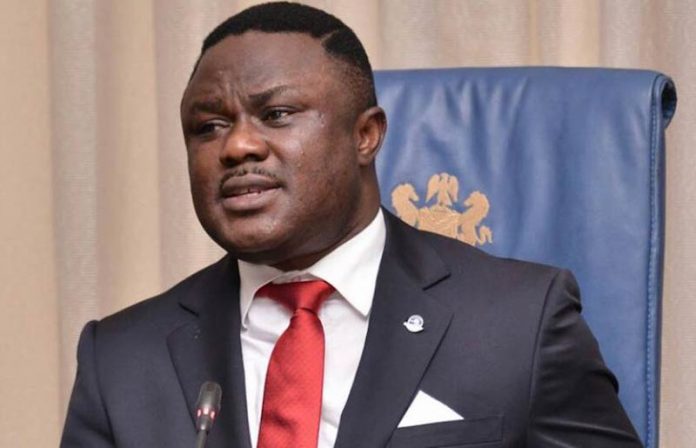 The move by Governor Ben Ayade of Cross River State to build another airport in a state whose economy is not too robust, has run into a storm. The seeming ego-boosting cargo airport project is not receiving the expected blessing of the community whose land is being targeted.

Women of Ukambi, a rustic community in Obudu Local Government Area are busy protesting the decision of the Ayade administration to construct an international passenger and cargo airport in their community.

The undying protest is coming on the heels of an outrage and the decision of the community to write the state government, demanding that due process be followed in the acquisition of land and compensation of land owners for the project.

But a Public Affairs analyst and concerned citizen of the state, Adie Adugba, appears to be raising a strong voice against the Governor Ayade airport project.

His testimony: I have watched with consternation and disbelieve the uncanny acts of intimidation and humiliation of the people of Atiekpe, Ikwumikwu and Ukambi communities and the violation of the sanctity of their ancestral lands under the guise of constructing what might be the third airport in Cross River.

Let me begin by putting things in perspective. Cross River which is commonly (and rightly) described as a civil service state has a population of about 3.7 million people and a workforce dominated by civil servants, which puts the average salary of a worker in Cross River at about N65,000 per month (source; https://nigerianfinder.com/average-salary-in-nigeria-details-and-analysis/).

The present administration has done exceedingly well in the area of payment of salaries and emoluments of civil servants and other government appointees, although the same cannot be said of most pensioners. In terms of exposure, Cross River is the 4th most indebted state in Nigeria coming only behind Lagos, Edo and Kaduna states with a foreign debt portfolio of $188.77 (67.9 billion naira) and a local debt stock of 168 billion naira, making a total of 235.9 billion naira (Source; https://punchng.com/lagos-edo-kaduna-criver-owe-over-half-of-states-foreign-debt/).

Now this is the state whose most pressing need at the moment appears to be an airport – an international airport.

Here is why this decision is puzzling and will not make any sense to a 5th grader: Should an international cargo airport be a priority project for a government that is so indebted that paying monthly salaries has been described severally by the governor as a miracle?

Who are those with the financial wherewithal to fly internationally, and to where exactly on an average income of N65k, bearing in mind that a one hour flight here in Nigeria averages about N40k return?

Nobody needs a cargo airport when this rail line is completed (if anyone should know, I believe that a sub- regional government such as this should know better).

The state has an existing airport with only two half-filled flights per day. This is in addition to an existing air-strip – Bebi air-strip which was constructed by the former governor Donald Duke in Obanliku (about two kilometres from Obudu Township) and upgraded by Former governor Liyel Imoke to include an Instrument Landing System.

One would have thought that the fantasy of an international cargo airport will be driven by need, but that doesn’t seem to be the case. In Cross River, it appears that, it is the tail that wags the dog, not the other way round.

The governor has secured approval from the state House of Assembly to build a 6 lane “super highway” believed to have an embedded 4G internet network (whatever that means) which according to him, will reduce the journey time between Calabar and Obudu from 4 hours to 2.5 hours.

The question now is; why will you spend over 700 billion naira of money the state doesn’t have, to build a road that they do not need?

Or has the super highway project become a pipe dream like the rest of them all? (Cally Air, Cally Vegas, Deep Sea Port, etc).

Keep in mind that there is a coastal rail line in the mix, which ordinarily, should invalidate the need for a so-called super highway.

What is the budget of the new international airport and how is it being funded?

What is the budget set aside for compensation and relocation of most people in these three villages affected by the 9km square land acquisition?

Or does it end with the pocket monies currently being distributed by one Mr. Joseph Adie (alias Jungle Joe) and Mr. Eric Akpo (the governor’s inlaw)?

Where is the EIA for the construction of the airport (or does the professor not know that a development of this magnitude requires a standard EIA?)

Why has the expression of interest for the design and construction only been published on the 15th of May, but with closing date for submission slated for the 8th of May (which is clearly an obvious afterthought).

What comes first in government acquisition of land for a development of this magnitude?

Is it the deployment of earth moving equipment to obliterate people’s crops and farmlands or a formal engagement to weigh-in on the designs, predicted environmental, health and socio-economic impacts and proposed mitigations and possible alternatives to the proposed development?

Grabbing 9km square of land from the three villages – Atiekpe, Ikwumikwu and Ukambi (which surprisingly are the smallest villages in Obudu local government area) suggests that, 90% of land belonging to these small villages will have been seized by the state and those left in these communities after the displacement will have no farmlands.

For those who may be wondering what 9km is, this is like going from Obudu Motor Park to Bedia village.

There will be preponderance of communal wars between neighbouring villages owing to lack of farm lands and the obscure land boundaries resulting from this exercise. Ukambi and Ikwumkwu for instance will have their land split in two, with one part left inaccessible, because of the airport siting and the remaining slender part left deep into the Tiv boundary in Benue state.

With a run-way of 5.5 km as indicated in the letter sent to the clan heads of the affected villages by Eric Akpo, on behalf of the governor, it is safe to say with absolute certainty that NOBODY will be able to live either in Ukambi or Ikwumikwu, because a Boeing 737 aircraft produces up to 90 decibel of noise, from 1 mile away and health standards stipulate a maximum of 80 decibels of noise over an 8hr period.

The gaseous emissions (poisonous oxides of nitrogen, sulphur carbon dioxide etc) following the siting of the airport will have exceedances well above the current back-ground values and I have no doubt in my mind that no environmental expert will produce an Environmental Impact Statement that will give an ‘all clear’ for an airport to be built in that location.

People will be separated from their ancestral land where their fathers and forefathers were buried and this is an abomination anywhere in the world.

It is not clear what the governor intends to do with the land. There is neither any plan to disclose the contractor handling the construction, nor to publish the non-technical summary of the EIA (in a lay man’s language) and design publicly for 14 days as stipulated by law.

If the claim is that, there is no contractor yet, why has work started (as indicated in the letter to the clan heads)?

The Aberration Going on:

To give credence to the speculation going on -that there is no genuine intention to build an airport, there has been no single step taken since this nightmare was conceived that has been well though-out. This has left everyone in doubt about the real intentions of those behind these atrocities.

Now, assuming that this decision makes any sense (whether economic or strategic), I believe that there is a procedure for carrying out such an infrastructural development from land acquisition through the design phase and the main construction.

This so-called airport project is expected to take up 9km square of ancestral land belonging to three villages and as I write, earth moving equipment have been on site for the past three weeks causing an unimaginable havoc, such as cannot be reversed (even if they were stopped today).

Now we must understand that the mainstay of the economy of these small villages is farming. The victims of this high-handedness are peasant farmers, whose only source of livelihood is farming. This is where it gets worse. There has been a “community engagement” initiated by Mr. Eric Akpo, who is SA Technical and doubles as an inlaw of the governor, in the company of one Mr. Joseph Adie (who strangely is a member of one of the affected communities). Their engagement so far has been a letter directed to the clan head, notifying him of the “good intentions” of the governor who intends to “bring development to his people”.

They also quoted a section of the Land Use Act from where they derive the authority to claim and use the land for whatever purpose they deem fit. They are however silent on more important issues like the EIA and adequate compensation for those affected and a possible re-settlement of these communities, if they are being realistic.

The most repulsing action so far taken by these individuals is the pattern of what they have described as compensation. These individuals have been arbitrarily disbursing N1,500 (one thousand five hundred naira) from their back pockets as compensation for every palm tree felled and between N5000 and 15000 naira (maximum) for every cassava and yam farm destroyed respectively.

All three villages have been given about 6 million naira in total as compensation for 9km square (which is roughly 600k for a square km of land) how ridiculous!

No voucher, no receipt whatsoever for spending government money. I watched these things happen right before me.

I am therefore calling on the governor, to allow common sense and reason to prevail. It is a moral imperative to take back our ancestral homeland and chase these fellows out of our land.

He must immediately release all community members who have so far been arrested unconditionally. I am aware that some of the communities have approached the courts and letters are going be addressed to the United Nations, UNICEF, the British high commission and the American consulate about attempts to annihilate some tribes in Obudu and make them destitute under the guise of bringing development to the grass roots. Communities are also being sensitised about the dangers of this invasion.

Although some people have hinted that the so called development (they insist it is not an airport) should be allowed to go on, while plans are perfected to reclaimed their land with any developments on it, at the appropriate time through the courts when Professor Ben Ayade leaves office in 2023. But I dare say that the desecration of our ancestral land would have received an irreversible damage by the time whatever construction going on take roots.

I am also aware that a handful of individuals in government appear to be defending this aberration in public but have condemned it in strong terms when challenged by the residents of the affected communities. However, if there is anyone out there, who believes that this “development” is laudable, please provide 9 km square of land within your community for this airport to be built. We are not interested.

We call on the EFCC to wade into the financial recklessness going on in the guise of compensation and arrest Mr Eric Akpo and Mr Joseph Adie (Jungle Joe) for flouting government’s accounting standards in the glare of the whole world. They have no immunity from prosecution. Adie Adugba is from Ukambi.