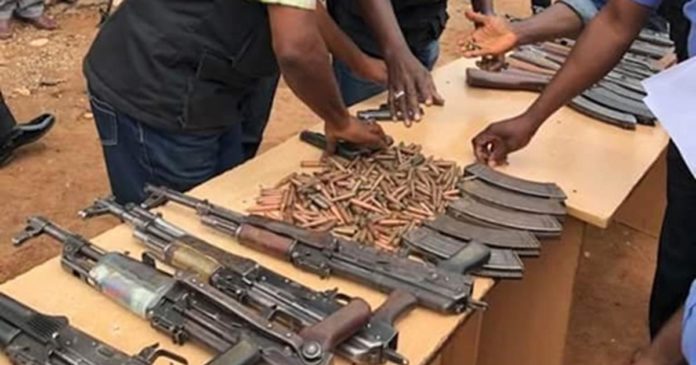 The Nigeria Police, Taraba State command, had intercepted two persons, suspected to be kidnappers and in the process recovered 10 Ak-47 guns, 13 magazines and 425 live ammunition.
This was disclosed by, Police Public Relations Officer (PPRO), Taraba Command, David Misal, in a press briefing on Monday.
“The operatives of the Command attached to Lau Division had on the 12/07/20, about 20.00hrs acting on an intelligence report, intercepted two persons now at large on a motorcycle, who crossed from Karim Lamido LGA  to Lau axis. On sighting the police, they hurriedly abandoned the motorcycle and ran into the bush. Upon search, 10 serviceable AK 47 rifles, 13 magazines 425 live ammunitions were recovered.
“Recall that in recent times Lau communities recorded series of crises ranging from communal crises, herders Farmers crises and kidnappings which resulted in the loss of lives and destruction of properties.
“It is believed that the arms recovered is a deliberate attempt by mischief makers who are believed to have procured them for the purpose of attacks, kidnappings as well as distributing it to their criminal gangs/foot soldiers to unleash mayhem on innocent residents of Taraba State. An effort is ongoing to arrest the fleeing suspects,” he stated.