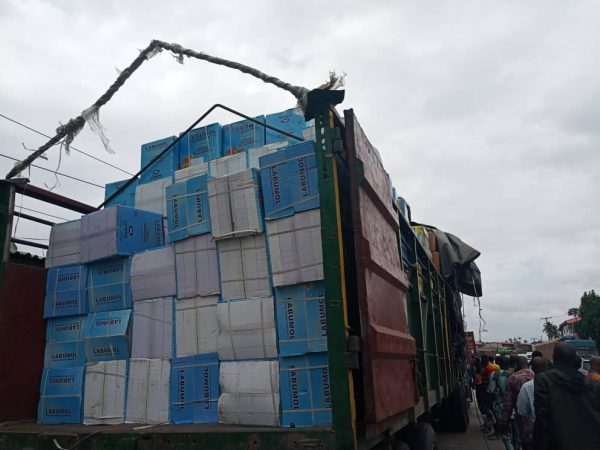 The Police in Taraba has arrested two suspected persons with a truckload of Federal government banned drugs, destined to Jalingo from Anambra state.
This was disclosed by the Police Public Relations Officer (PPRO), Taraba command, in a press briefing in Jalingo on Monday.
“Considering the upsurge in the consumption of illicit drugs which gives rise to the increase in crime associated with these hard drugs, on the 12/07/20, operatives of the Command, acting on intelligence, intercepted a truck loaded with different kinds of goods which arrived Jalingo from Anambra State. when thoroughly searched the following drugs were recovered: Exiplon Codeine 20 carton, Codolin Codeine 21 carton, Piscof Codeine 20 carton, Tutolin 13 carton, Coflin 2 carton, NGC 6 carton, Liquid Quinine 1 carton, Sildenafil citrate Tables 5 carton, Misoprostol 31 Pics, Lifemotil 16 Pics.
“Most of the drugs contained contents of codeine which when consumed by the youth influence their criminal activities which necessitated the Federal Government to place a ban on those drugs.
“It’s important to know that most of the drugs labels show what was not the contents, rather a different label given to those cough syrups to conceal the real fact which is contraband medicine.
“One Emmanuel Ugwoke and Jude Azw were arrested and detained in connection to the crime,” Misal stated.
According to him, “the Commissioner of Police, while applauding the patriotic people of Taraba State for supporting the police, further urge the general public to be more security conscious and promptly report to the police all criminal elements around their neighbourhood for necessary action”.