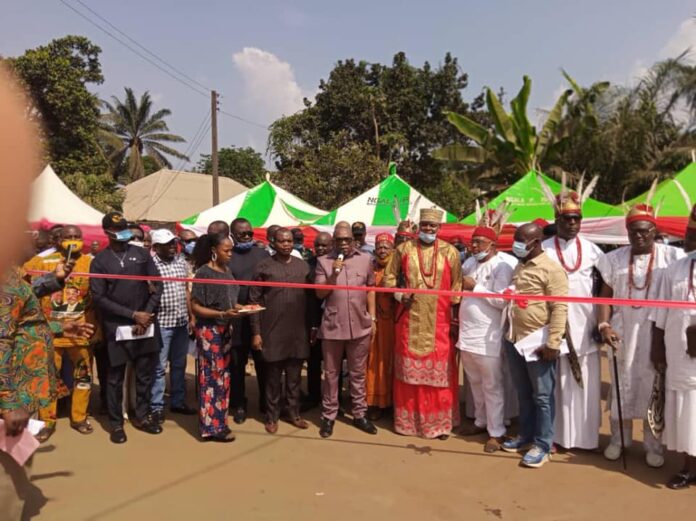 Anambra Governor, Willie Obiano since assuming office in 2014, has sustained appeal to well-meaning Anambra people to key into the Aku Lue Uno – Think Home Philosophy of the state government for holistic development of the state.

Inaugurating the project, the Anambra Commissioner for Works, Engr. Marcel Ifejiofor represented by the permanent secretary of the ministry, Barr. Emeka Ohuoha noted that Governor Obiano is always elated whenever a son or daughter of the state heeds the Akulueuno call.

“His Excellency Governor Obiano said we should extend his gratitude to Chief Tochukwu Kpajie for this wonderful initiative. And also to the people of Uke for their support to his administration. Chief Kpajie may not be the richest in this town but his love for his people and the state spurred him to build this road. Government cannot do all the developmental projects.  Anambra has billionaire sons and daughters in all parts of the world. So, we are calling on them to emulate the likes of Chief Tochukwu Kpajie and others who had invested their wealth in the state,” Engr. Ifejiofor said.

Earlier in his speech, the benefactor, Chief Tochukwu Kpajie said that the initiative was aimed at giving his community a facelift.

“Governor Obiano is working on some road projects in our town and we know government cannot do everything. So, as an individual I know that building this road is for the benefit of my community. I had to do this as my own part of Akulueuno. I will also use this medium to call on Ndi Uke to embrace peace, because where there is peace, development will surely come. Let us come together to develop our community,” Chief Kpajie pleaded.

On his part, the Traditional Ruler of Uke Community, Igwe Charles Agbala said that Chief Tochukwu Kpajie has continued to support developmental projects in the town just like his father late, Igwe Sir. G.N.C  Kpajie.

In the Monarch’s words; “His father, the late Igwe Ezeude lived and breathed Uke. In all his dealings, peace and development of this community were his priorities. I’m happy that he begot a son like himself.”

Also speaking at the occasion, the Caretaker Committee Chairman of Uke Improvement Union, Chief  Chuks Igbanua thanked Chief Kpajie for the wonderful project while pleading with the state government to extend the road to other parts of the community.