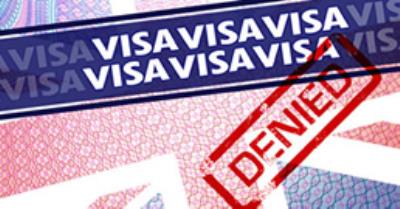 African sojourns to western countries are being curtailed for fear of overwhelming their hosts with the “disease” of the explosive population since many countries overstayed their visa and took advantage of birth tourism. We must learn from the hysteria to ostracize Africans with Ebola and how easily Coronavirus from China can be used like AIDS to stigmatize. This existential threat to rich African politicians and their cronies that make up about 10% of their population can be turned to a blessing in disguise and improvise.

Necessity is the mother of invention. No one will allow others to mess up their countries the way you have messed up yours. Encourage good alternatives at home, improvise locally and develop your young people as your mirrors and future. Visa denial to foreign places, schools, especially hospitals must not be your death sentence if you change!

Those Africans that think what happened to the Jews, Japanese, Spanish, Arabs and other legal citizens or immigrants outside countries of origin cannot happen to them will be caught unprepared out of complacency. Wishful thinking, the way it is written, myths, “village people” and Voodoo will not deliver Africa.

But African mentality to just make an excessive profit and apply for forex to blow abroad stifle local demand. We should not be satisfied to live outside our countries because of the fear of starving to death at home. People become more desperate when they are hungry. Patriotism to a country they cannot survive in is the last thing on their mind. It is not about freedom or democracy. Abi, shey na democracy we go chop?

Unfortunately, after 60 years of craving foreign Investments and getting poorer, African elites/politicians see the salvation of their economies in the magnanimity and sympathy of the same Investments more than in self-investment, reliance and discipline. They believe, as conditioned, that they are helpless. Miracle hands will appear from outsiders, not from within. Only God can save Africa. Guess who trained us that way.

It is political malpractice not to anticipate the end of legitimate visa to countries that have rejected your citizens, even after invading your own countries. True, we are there because they were here. But today, we crave to fly by 707 planes, wiggle through seas and deserts to get out. If you have the means to send your children to school and pay for medical treatment overseas, you can establish the same at home with the same money for more people.

The greatest amount of money should be spent on the greatest number of people, not on a few that have access to the national treasury. The richest top Ten-Percent of African population make enough to pull the rest of Africa out of humiliation, stigma, indignity and poverty if their expensive tastes are closer to the local population they serve; like those, they aspire to serve their people. The purchasing power of the top ten per cent makes them more attractively susceptible to foreign indoctrination, influence and adverts than most Africans that lack the means, even if they so desire.

If these top ten per cent only invested at home, more talented young people would stay rather than subject themselves to the risks and ignobility faced overseas, right from the airports. Unfortunately, those Africans inability to provide three square meals a day for a family or infatuation contributed to deserting a country. No continent would allow African population of 1.216 billion to overwhelm them. But when Africa is divided into countries, foreign investors have the choice to focus on those with the highest purchasing power.

How can average Africans spread purchasing power to pull one another out of poverty? The real demand comes from the people, as consumers. If Africans used that power to patronize local products, at reasonable prices it would create higher demand. The more buying power they have for local products, the more people are employed to satisfy high demand and less poverty in the land. Your demand is my job, my demand is your job.

What and who are the “educated consumers” right now? They are culturally western trained Africans, with the same desire as middle to upper classes, reflected in addiction for exotic tastes, gadgets, toys and travels. They create markets for Western goods and services in African countries. Since they can be exploited at home, there is no reason to welcome them overseas. African Governments can only incentivize local production but this demand is temporary. It is highly exemplary for most to lead by actions, not words.

The population density in each country does not mean there are more ten-percenters. Even if only the rich ten per cent of the population have the purchasing power needed to buy foreign goods and services. This is why they focus on Nigeria, South Africa, Ethiopia, Congo and Ghana as the countries with enough “educated consumers” to be courted since they think and act like foreigners.

Nothing drains the spending power of Africans more than foreign goods and services. So, folks wonder where poor Nigerians get the money to buy these exorbitant goods and services as the poverty capital of the world. It was Uncle Bola Ige that reminded us years ago that the GSM mobile phones that became the expensive pride of the elites in Nigeria were commonly used at Cotonou markets by sale-ladies.

If Nigeria is the world Poverty Capital, how can they afford so many foreign luxuries? Their top Ten-Percent is 20million of Nigeria’s population. They are more than many nations. Look at the population and the percentage of their nouveau riche of about 20m with more elites than the population of some European and African countries. Even locally made products with little foreign contents are more expensive in Nigeria than in neighbouring countries. Regardless of cheap local labour.

Most businessmen make more profit in Nigeria than anywhere else based on the demand of the top 20% or 40m folks. Though the cost of establishing their business or plant is greater in other African countries because of a worse enabling environment. Nevertheless, they raise their prices higher in Nigeria because of 40m demands. Even when cassava was added to wheat, the price of their acquired daily bread went up.

What is next after-acquired foreign daily rice at the expense of local rice, the poor would not be able to afford garri? Their intention has always been to raise prices because they can since there are enough people to pay. So, we have locally made products selling at a higher price than imports, encouraging more illegal imports.