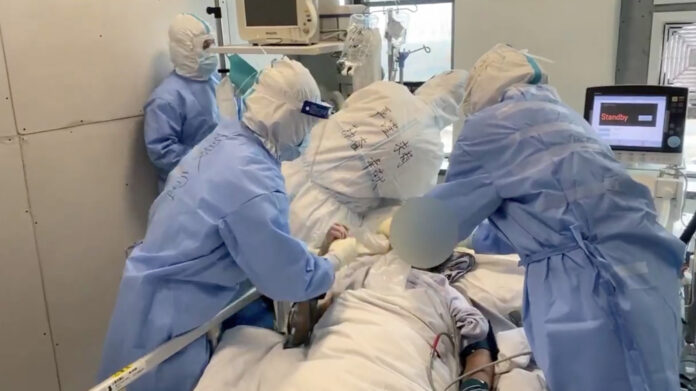 A small new Argentinian study has found that blood plasma from people recovering from COVID-19 could help prevent severe illness in older patients newly infected with the virus.

The findings give new hope to the notion that so-called “convalescent plasma” might have a role to play in treating COVID-19.

Earlier studies had been disappointing, showing the treatment had little effect on people with severe, advanced cases of COVID-19.

But the new trial of 160 patients was conducted in people infected with the new coronavirus who were not yet sick enough to require hospital care. Patients averaged 77 years of age. In the trial, 80 patients received plasma and 80 received a placebo treatment.

In other words, the treatment cut in half the likelihood that a patient would go on to require supplemental oxygen to help them breathe, the authors said.

But there were two key factors critical for donor plasma to be effective in curbing illness: It had to be given within 72 hours of the onset of symptoms, and the plasma must have a high concentration of disease-fighting antibodies.

In the study, about 28% of volunteers who’d recovered from COVID-19 and donated their plasma had achieved the high levels of antibodies in their plasma that was needed to produce a medical benefit, the team said.

“There is a paucity of therapies today to prevent progression of mild cases to severe illness and no clear pathway for keeping these patients out of hospitals, where capacity continues to be stretched”, Polack said in a Fundación news release.

“Our results provide a roadmap for an early intervention among individuals at higher risk, allowing us to expect a better prognosis for patients while reducing the need for oxygen support and hospitalization.”

One US expert stressed that the treatment still isn’t a remedy for most COVID-19 patients, including the seriously ill.

Patients must be able to access donor plasma within three days of their first symptoms, and that plasma must have a high antibody count. Also, she said, “we do not know the long-term effects of this therapy and if it is durable.”

Narasimhan noted that other treatment options—most specifically, monoclonal antibody therapies (such as the type given to President Donald Trump)—are available. Those treatments “may be a more beneficial treatment overall”, she said, so “head-to-head studies will need to be done to evaluate which therapy has the most benefit.”

Director of the Pneumonia Programme at the Bill and Melinda Gates Foundation, funder of the study, Dr. Keith Klugman, said in the news release, “effective ways that can be made available quickly to prevent the hospitalization of COVID-19 patients are critical to saving lives because it will take some time for new vaccines to reach everyone who needs them.”

Noting, Klugman adds, “in addition to indicating the efficacy of a tool that could be implementable and affordable in lower-income countries, the study provides key insights about the immune response to COVID-19 that could help with development of other medical interventions.”

The findings are published in the New England Journal of Medicine.

However, early in the COVID-19 pandemic, anecdotal reports suggested that infusing very sick patients with the blood plasma of people who’d survived the disease might help boost outcomes.

But study findings released last November 24 in the New England Journal of Medicine, along with disappointing results from prior trials, suggest that those initial hopes may have been unfounded.

The new study compared outcomes for 228 hospitalised COVID-19 patients who got an infusion of so-called “convalescent plasma” against those of 105 patients who did not (the “placebo group“). All were so sick as to have developed pneumonia.

According to the team leader, Dr. V.A. Simonovich, of the Italian Hospital of Buenos Aires, one month later “no significant difference was noted between the convalescent plasma group, and the placebo group” in terms of clinical outcomes, with about 11% of patients dying in both groups.

The theory behind the use of survivors’ blood plasma in people battling COVID-19 is that plasma contains immune system agents that might aid recipients in their fight against the disease.

But a prior study from India in patients with “moderate” COVID-19 found little benefit of the treatment in stopping illness from progressing to a more severe stage. That study was led by Dr. Anup Agarwal, of the Indian Council of Medical Research in New Delhi, and was published last October 22 in the BMJ.

According to one US expert unconnected to either trial, it may be time to give up on convalescent plasma as a viable COVID-19 treatment.

“There have been several major trials that have shown the same results: Convalescent plasma does not seem to have an impact on the course of COVID-19″, said Dr. Mangala Narasimhan. She’s senior vice president and director of Critical Care Services at Northwell Health, in New Hyde Park, N.Y.

Narasimhan also noted that in the Argentinian trial, “even with good measurement of the amount of antibody they were giving people [in the transfusions], there was no benefit seen.”

She believes that other treatments should remain first-line options for severe COVID-19.

“The new monoclonal antibodies will give a more targeted and reliable antibody load to COVID-19 patients and may have an impact on the course of disease if given early after positive testing”, Narasimhan said.