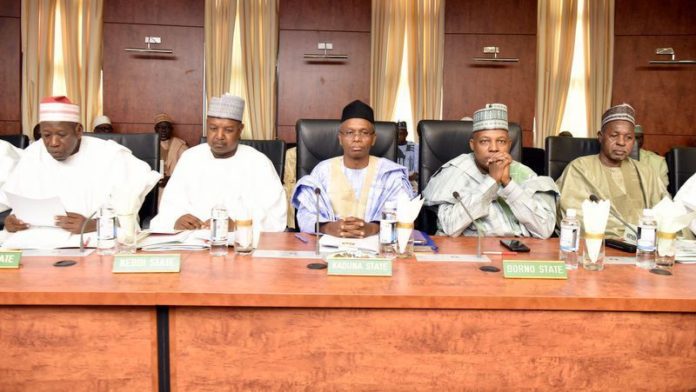 Irked by the worsening insecurity in Nigeria, the People’s Redemption Party (PRP), a party with a radical leaning under the leadership of the legendary Malam Aminu Kano in the aborted Second Republic, has taken on the Northern governors, challenging them to urgently find a lasting solution to the deteriorating state of the country.

PRP National Chairman, Falalu Bello, says his party wants the governors to critically address key factors compounding the deteriorating state of Nigeria, more particularly the North. ‘’Such includes a holistic and a well-informed position on education, in tune with the recent Presidential directive on free and compulsory education for the first nine years of schooling for all Nigerian children’’, the party said.

The 19 Northern governors on the platform of the Northern Governors’ Forum have already planned for a summit in Canada this coming August 1.

PRP which is strongly opposed to holding the summit outside the country is insisting that holding it in Nigeria will avail the governors an opportunity to engage relevant stakeholders in the communities where the brunt of the insecurity challenges are felt more.

Coming on the heels of the latest killing of a man and his son by suspected Fulani herdsmen in Miango, Bassa Local Government Area of Plateau State, PRP said it wants the governors to properly tackle the recurring problem of the Almajiri system of education.

Thomas Wollo, 46, and Nggwe Thomas, seven, were said to have been  attacked and beheaded by some herdsmen close to their  home in Tafigana village, Bassa LGA, while returning from  a choir practice at about 8.50pm on Sunday.

A report by The Punch has it that their killers who disappeared into the bush, also killed a woman in Ancha community in the same local government area on Monday.

According to the newspaper, Miango Youth Development Association spokesman, Zongo Lawrence, who confirmed the Tafigana village killing, also said the hoodlums went to a nearby village in Hukke and allegedly destroyed farm produce worth millions of naira.

‘’Seventeen of our people have been killed by Fulani herdsmen this year. We are under heavy siege’’, Lawrence reportedly said as the President of Irigwe Youth Movement, Chinge Dodo, who also confirmed the attacks,  added that the areas had been living  in fear of further attacks by herdsmen.

‘’On Sunday two of our people were attacked and killed at Tafigana village in Mango District of Irigwe Chiefdom. I have just been informed this morning (Monday) that the Fulani herdsmen  had moved to Ancha village and killed a woman. As a people, we are continuously under attack and nobody seems to be hearing our cry for help. It appears that killing our people has become a routine’’, the newspaper quoted him.

Though the Police Spokesman in the state, Mathias Tyopev, according to The Punch, did not pick his phone calls, the Paramount Ruler of the Irigwe Kingdom, Ronku Aka, however confirmed the killing of Wollo and his son.

Bello who described the proposed Canada trip by the governors as ‘’a jamboree’’, said it was distressing that the North has been left in the firm grip of poverty, principally fuelled by ‘’a horrendous state of insecurity’’ in the region.

According to the PRP, ‘’in spite of the negative indices, Northern governors are planning to embark on a junket when the states they administer remained in a deep mess where education had been left untended. In their states agriculture and animal husbandry are suffering. Yet, they have the gout to take of public funds and travel out of the African continent for a so-called Canadian summit.’’

Continuing, the party maintained that  a summit of Northern governors in a time of insecurity, rancour on ranching, banditry and kidnapping is necessary, ‘’if properly and appropriately handled. Considering the spate of insecurity we are facing as a nation, significant aspects of which are laid at the feet of herdsmen, it would be most appropriate for such a summit to hold in the country.

“A summit held at Obudu Cattle Ranch in Cross River State would surely showcase how a ranch in full bloom has already been established and proved to be a worthy venture, with recorded commercial value. Holding such a summit at Yankari Games Reserve in Bauchi, or on the Mambilla Plateau of Adamawa/Taraba axis or even the Falgore Games Reserve of Kano will make a powerful statement.’’

Adding, PRP argued, ‘’if the cold climate of Canada was the attraction for this resource guzzling summit, the Obudu Cattle Ranch has all the extreme cold of a temperate climate they may need. Going to Obudu or Yankari Games Reserve will expose the viability and preparedness of the governors and their states to solve their own, and Nigeria’s problems.’’

Bello said PRP is urging the governors to quickly retrace their steps, and return to the path of rectitude and hold their summit locally, stressing that Obudu Ranch, Yankari Games Reserve, Falgore Games Reserve and Ririwai Minerals Village, the Mambilla Plateau or any of their states is good enough for the summit.