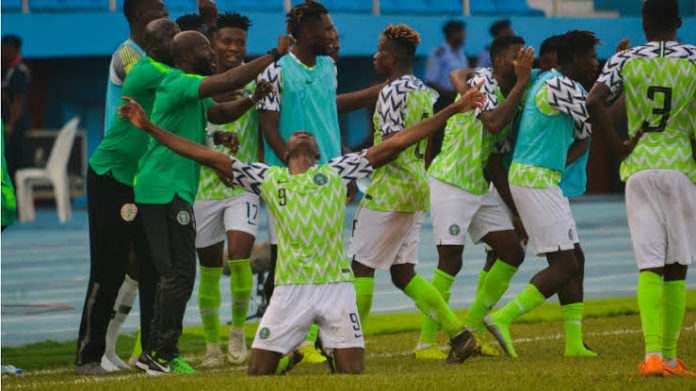 Nigeria U-23 team popularly known as the Olympic Eagles on Tuesday evening defeated Sudan 5-0 at the Stephen Keshi International Stadium in Asaba.

Nigeria lost the first leg 1-0 in Sudan but bounced back with a spectacular performance to book their place in the U-23 AFCON competition in style.

Taiwo Awoniyi opened the scoring in the 10th minute after Ibrahim Sunusi’s effort was parried by the Sudanese goalkeeper.

Ndifreke Effiong completed his brace just before half time with a tidy finish from a low cross by Ebube Duru.

The first half ended with a 3-0 scoreline in favor of the Olympic Eagles much to the delight of the home supporters at the Stephen Keshi Stadium in Asaba.

Nigeria started from where they stopped in the first half when Ibrahim Sunusi provided an assist for Sunday Faleye to score the fourth goal.

Sunusi, the 2019 NPFL top scorer, capped off a brilliant individual display by putting icing on the cake with a goal of his own to make it 5-0 in favor of Nigeria.

The Olympic Eagles thus qualified in grand style for the 2019 U-23 AFCON to be held in Egypt in November.

Nigeria are the defending champions of the competition after winning the first edition in Senegal in 2015.