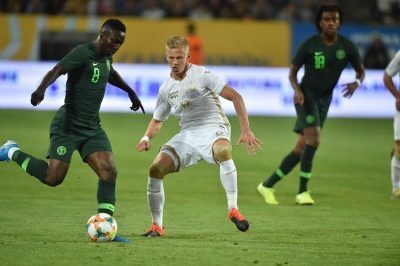 The Super Eagles of Nigeria on Tuesday night played out a 2-2 draw with Ukraine in an international friendly match played at the Dnipro Arena.
Debutante Joe Aribo gave Nigeria an early lead in less than four minutes following a good work from Samuel Kalu, who dazzled challenging Ukraine players before finding Alex Iwobi, who fed on-rushing Aribo to stab home.
Red-hot Victor Osimhen scored his first goal for Nigeria from the spot kick after Samuel Kalu was fouled in the box by Eduard Sobol in the 34th minute to give Nigeria a 2-0 lead. However, as the second half progressed, the Ukrainians scored two goals in two minutes to deny Nigeria victory.
Oleksandr Zinchenko reduced the deficit with a fine individual goal, a minute later Roman Yaremchuk scored a controversial goal to restore parity for the hosts.
With his opener in the game, Aribo has joined the list of Nigerian players to score on their debut for the national team, an honour he shares with the likes of Teslim Balogun, Brian Idowu, Julius Aghahowa, Finidi George, Victor Agali and Obafemi Martins.