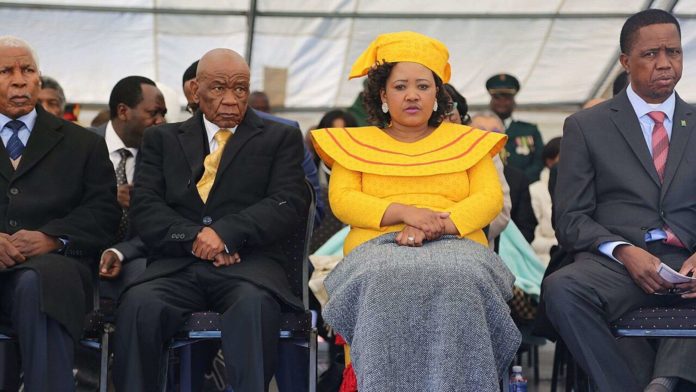 Lesotho’s first lady was released on bail on Wednesday after she was detained overnight and charged with murder over the killing of her husband’s estranged wife.

Maesaiah Thabane, 42, had been placed in custody after turning herself in on Tuesday, ending a weeks-long disappearance.

She was charged after police quizzed her on the brutal murder of Prime Minister Thomas Thabane’s wife two days before his inauguration in June 2017.

The couple had been embroiled in bitter divorce proceedings when Lipolelo Thabane was gunned down in front of her home in the capital Maseru.

Thomas Thabane agreed to step down last month after police linked his mobile number to communication records from the day of the crime. He has not yet given a timeline for his resignation.

His wife made the first appearance before Lesotho’s magistrate court on Wednesday after spending the night in jail.

In court, Maesaiah Thabane stood in a traditional pink dress before a roomful of opponents and sympathisers, listening as the magistrate read out her rights.

Her husband did not attend the hearing.

The first lady is suspected of orchestrating the shooting. Police have also charged her for the attempted murder of Lipolelo Thabane’s friend Thato Sibolla, who was wounded at the scene.