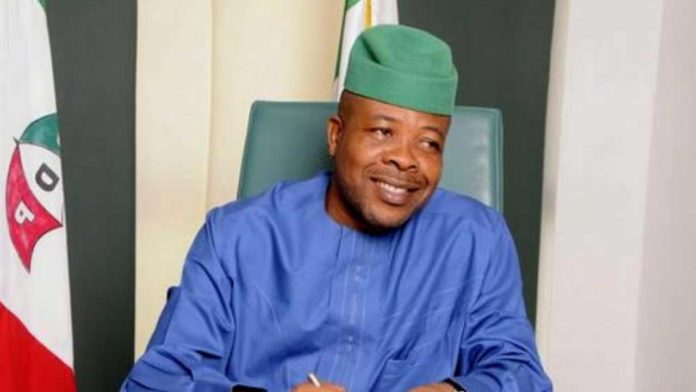 A seeming deft political move by the ousted Imo State Governor, Emeka Ihedioha, to take over two oil wells from Rivers State, has suffered a fatal blow in a Federal High Court, Abuja.

Like it did to Bayelsa State on the ownership of Soku oil wells worth over N720 billion, Rivers wrestled Ihedioha in a legal tussle.

Ihedioha who was sacked by the Supreme Court as Imo governor had while still on the saddle, written to President Muhammadu Buhari, demanding revenue from the Federal Account in respect of Mbede and Akiri oil wells.

Irked, the Nyesom Wike administration went to court over the matter.

Ihedioha had asked the Federal Government to direct the Revenue Mobilization, Allocation and Fiscal Commission (RMAFC) to undertake payment of N15 billion to Imo for oil wells allegedly belonging to the state, but which are being counted for Rivers.

But a Federal High Court in Abuja has declared that Rivers is entitled to continue to receive and retain revenue from the Federation Account and other accounts maintained for the purpose in respect of oil revenue derived from oil wells within the territory of Rivers based on the 13percent derivation formula currently applied by the authorities.

The Court has accordingly restained the Federal Government and her agencies from deducting funds meant for Rivers in respect of the Mbede and Akiri oil wells.

The Court further declared that Rivers (represented by the Plaintiff on record) is entitled to receive and retain revenue from the Federal Account as provided for under the Constitution of the Federal Republic of Nigeria 1999 (as amended) in respect of revenue drive from the oil wells generally referred to as Akiri and Mbede oil wells located within the Rivers territory.

Justice Tawo declares that until the conflicting claims over Akiri and Mbede oil wells by Rivers and Imo (represented by the 2nd Defendant in this suit) are resolved by the National Boundary Commission, the 4th Defendant cannot deny Rivers its due share of public revenue under the Constitution (as it is currently being distributed), or in any manner after the sharing formula or reduce the share of public revenue due to Rivers on account of the claim of Imo State (represented by the 2nd Defendant) to the said Akiri and Mbede oil wells.