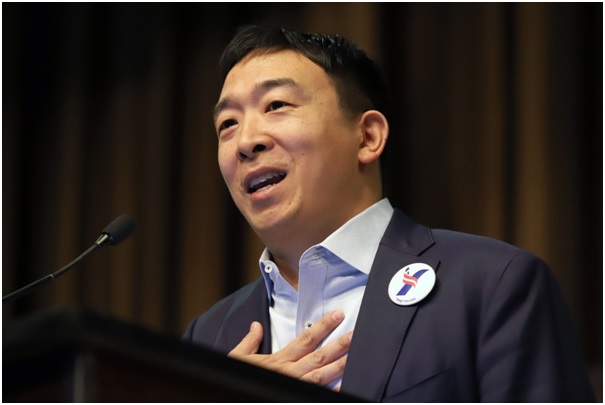 When Andrew Yang announced his intentions to be a candidate in the 2020 US presidential election, he was initially regarded as an outsider in odds for who will win the Democratic nomination. However, in recent months Yang has gained more and more popularity.

The lawyer, entrepreneur and founder of Venture for America is still by no means favourite to win the nomination, but the momentum he has picked up recently means he must be considered as a serious contender. Yang has no previous experience in political office, so let’s have a look at how the 44-year-old has increased in popularity, and how he hopes to effect change in America.

Born to Taiwanese parents, Yang was born in Schenectady, New York, and went to Brown University to study economics and political science before attending Columbia Law School. After spending several years as a corporate attorney, he decided to go down a different route, focusing more on working with start-up companies and developing businesses.

He spent three years as vice president of a healthcare start-up, before joining the test preparation company Manhattan Prep. This is where Yang made his name in the business world, eventually rising to the position of president. In 2009, Kaplan, Inc. bought Manhattan Prep for $11 million, before Yang left the company in 2012.

During his final years at Manhattan Prep, Yang founded the non-profit Venture for America, an organization whose mission is to create “economic opportunity in American cities by mobilizing the next generation of entrepreneurs and equipping them with the skills and resources they need to create jobs.”

Venture for America went from strength to strength, recruiting promising graduates and enrolling them in a two-year program which allowed them to work for start-ups in growing US cities. In 2012, Yang was named as a ‘Champion of Change’ by the Obama administration, and was also named as a ‘Presidential Ambassador for Global Entrepreneurship’ in 2015 – proof of the positive effect Venture for America has had on young American businessmen and businesswomen, and proof too of Yang’s entrepreneurial talents.

Yang is keen to use his knowledge of business and economics as the basis for his campaign to win the Democratic presidential nomination. As mentioned already, he has no political experience, but Yang is using this as one of the key points of his candidacy. “I’m not a career politician – I’m an entrepreneur who understands the economy,” he says on his campaign website, seeking to appeal to those American voters fed up with the perceived self-servitude of many politicians.

The 44-year-old that “automated technologies – robotic solutions, software, and artificial intelligence –have already destroyed more than 4 million US jobs”, and his campaign is based around taking steps towards avoiding an unemployment crisis. His main – and most debated – policy is to introduce a Freedom Dividend, a universal basic income (UBI) to be given to every American over 18 years old. This would take the shape of a $1,000 monthly payment, paid for by a new tax imposed on the companies that profit most from automated technology.

On the hot topic of healthcare, Yang believes in Medicare for All –that all US citizens should have access to basic healthcare. In terms of gun control, Yang is in favour of greater background checks, and the banning of the most dangerous assault weapons which are contributing to violent mass shootings.

He is also keen to develop a strong plan of action to combat climate change. His policy is centred on transitioning away from fossil fuels to renewable energy, by using America’s entrepreneurial talent to create a sustainable means of addressing the issue. He also backs the passing of a constitutional amendment to ensure that future government administrations are accountable for environmental issues.

Yang’s growing popularity is indicative of a nation eager for change and eager to see problems addressed in a sensible and meaningful way. He has a strong social media presence, which has helped his campaign gain traction, especially his appearances on popular podcasts such as The Joe Rogan Experience. It may prove that winning the Democratic presidential nomination is a step too far for Yang. Either way, he has certainly made a big impact.