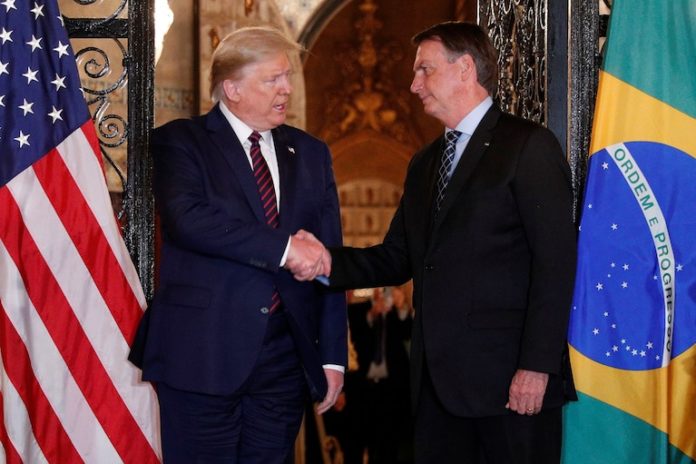 Brazilian President Jair Bolsonaro, who dined with President Donald Trump on Saturday at Mar-a-Lago has tested positive for coronavirus.

It has been learnt that Trump shook hands with him but is yet to go into self-quarantine despite CDC guidelines describing someone in his situation as ‘medium risk’ for infection.

Instead, the president announced he would hold a press conference at 3 pm on Friday at the White House on the coronavirus. There he will declare a national emergency, Bloomberg News reported, which would open the door to more federal aid for states and cities.

Bolsonaro, 64, was checked for the disease after his aide Fabio Wajngarten tested positive for it. The results of a second test on the Brazilian president are expected to be known on Friday. The entire plane containing the Brazilian delegation to America is reported to be contaminated.

On Thursday, Trump brushed aside concerns about his encounter with the Brazilians – the latest in a series of brushes the president has had with the highly-contagious disease.

Both Bolsonaro and Wajngarten, his press secretary, were at the Winter White House Saturday night. Wajngarten had his photo take with President Trump and Vice President Mike Pence.

Trump and the first family have resisted going into self-quarantine despite other lawmakers who came into contact with those testing positive for the disease going into voluntary isolation.

The Centers for Disease Control and Prevention recommends testing if you ‘have been in close contact with a person known to have’ the virus. The agency defines close contact as ‘being within approximately 6 feet (2 meters) of a COVID-19 case for a prolonged period.’ Also, according to CDC guidelines, the president would be considered ‘medium’ risk for exposure.

Other world leaders are self-quarantining. Canadian Prime Minister Justin Trudeau is in voluntary 14-day quarantine after his wife, Sophie, tested positive for the disease.