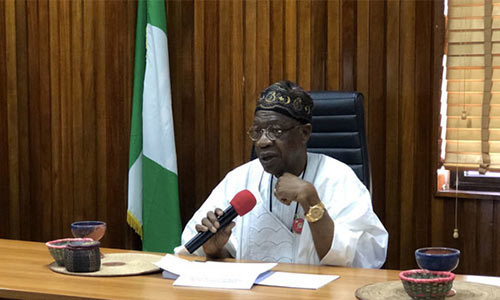 The Nigerian government on Saturday appealed to organized labour to suspend its planned nationwide strike over the increase in petrol price and electricity tariff.

Recall the government and the organised labour, Nigeria Labour Congress (NLC) and Trade Union Congress (TUC), failed to reach an agreement on Thursday over the increase in petrol price and electricity tariffs in the country.

Minister of Information and Culture, Lai Mohammed on Saturday said the timing of the increase in the petroleum and power sectors was a necessary coincidence and not a plan by the government to increase the current economic realities of Nigerians.

Addressing online publishers in Lagos, Lai Mohammed asked Nigerians to bear with the government at such a time, adding that more prosperous years are ahead.

He mentioned that the deregulation of the petroleum sector will save the country trillions of Naira, which will then be used to provide modern infrastructures for the benefit of Nigerians.

He said: “We wish to appeal to organize labour to shelve its planned strike, which can only bring more hardship to ordinary Nigerians.

“The timing of these two necessary adjustments has raised some concerns among Nigerians and reinforced the false narrative that the government is insensitive to the plight of the citizens. This is a mere coincidence. First, the deregulation of PMS prices was announced on 18 March 2020, and the price modulation that took place at the beginning of this month was just part of the on-going monthly adjustments to global crude oil prices.

“Also, the review of service-based electricity tariffs was scheduled to start at the beginning of July 2020 but was put on hold so that further studies and proper arrangements can be made. Like Mr. President said at the opening of the last Ministerial Retreat, this government is not insensitive to the current economic difficulties our people are going through and the very tough economic situation we face as a nation. We certainly will not inflict hardship on our people. But we are convinced that if we stay focused on our plans, brighter and more prosperous days will come soon.

“We thank Nigerians for their understanding, and wish to appeal to them to please bear with the government. The deregulation of the petroleum sector will save the country trillions of Naira, which can then be used to provide modern infrastructures for the benefit of the people. It will also spur investments in the petroleum industry, especially in the building of local refineries which will result in lower fuel prices.

He also explained how the recent hike in fuel price will benefit Nigerians.

Some Nigerians had accused the government of being insensitive to the plight of Nigerians, especially during a pandemic.

Lai Mohammed while addressing newsmen in Lagos on Saturday added unlike popular opinions, the government is not insensitive to Nigerians, adding that the full deregulation of the petroleum sector and the service-based electricity tariff adjustment will, in the long run, benefit the ordinary people.

Explaining how the minister said: “Let’s start with deregulation. Ordinary citizens are not the beneficiaries of the subsidy on petroleum products that have lasted for years. Between 2006 and 2019, a total of 10.4 trillion Naira was spent on fuel subsidy, most of which went to fat cats who either collected subsidy for products they didn’t import or diverted the products to neighbouring countries, where prices are much higher. Instead of subsidy, ordinary Nigerians were subjected to the scarcity of petroleum products.

They endured incessant long queues and paid higher to get the products, thus making the subsidy ineffectual.”

The minister added that aside from the benefits, the government can no longer afford the cost of subsidy due to the economic conditions.

“Apart from that, the truth is that the government can no longer afford the cost of subsidy, especially under the prevailing economic conditions. Revenues and foreign exchange earnings by the government have fallen by almost 60%, due to the downturn in the fortunes of the oil sector. And there is no provision for subsidy in the revised 2020 budget.

“So where will the subsidy money come from? Remember that despite the massive fall in revenues, the government still has to sustain expenditures, especially on salaries and capital projects,” Lai Mohammed added.