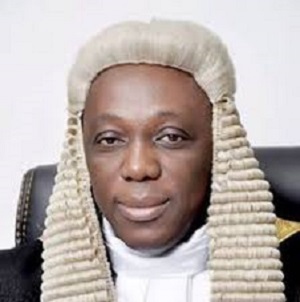 The Delta State Chief Judge, Justice Marshal Umukoro has lamented the high rate of divorce petitions, attributing it to part of social vices contributing to the congestion of prison in the state.

Justice Umukoro was speaking on Friday when he released 77 inmates and granted bail to two others at Ogwashi-Uku Medium Security Custodial Centre in Aniocha South Local Government Area of Delta State.
According to the CJ, between January and May this year alone, 157 dissolutions of marriage petitions have been filed in various courts in the State, describing the ugly trend is worrisome.

Such an ugly trend, he said, has negatively impacted on juvenile delinquency, which in turn caused an alarming rate of crime in the society.
The Chief Judge has so far released 383 inmates out of 2143 warrants reviewed in the five Custodial Centres and Sapele Remand Home across the State.
A breakdown of total inmates released in the five correctional centres showed that at Warri 149 freed and six granted bailout of 787 warrants reviewed; Sapele out of the 252 reviewed, 77 were pardoned and two granted bail; In Kwale, 42 released and four granted bail while 265 warrants were reviewed in Agbor out of which 38 were freed and four granted bail.

While advising parents to monitor their children closely and conduct adequate profiling of the friends they keep, the Chief Judge admonished youths to avoid bad company, noting that 80 percent of inmates whose ages were between 17 and 25 in Ogwashi-Uku prison were from outside the State.

“Like as I always say, it shows that our family system is being threatened. Many parents are not doing their homework,” he stressed.

Decrying the adverse consequences of complainants who prematurely withdrew from rape cases, the Chief Judge stated, “It is unfortunate that most of the victims are being pressurized to settle and agreed to compound the offence. It is a setback on the advocacy by FIDA, our women Lawyers and other NGOs who are advocating that people charged with such offences should be tried.”

He admonished Lawyers who represent inmates to plead for mercy rather than having the mindset of inquiring into their guilt or innocence, even as he implored them to exercise discretion to balance the scale of justice.

Justice Umukoro who refused to release or grant bail to inmates charged with capital offences such as kidnapping, murder and rape, noted that such heinous crimes were rampant in the society.

One of the inmates granted bail on health ground was one 53-year-old Benneth Madubugini from Okpanam diagnosed of glaucoma, while Emeka Chukwuma, 19, who had been in custody since 2017 for robbing a victim of the sum of eight hundred and twenty naira was also pardoned by the Chief Judge, stressing that it amounted to economic wastage on the Federal Government.

The pardoned inmates thanked the State Chief Judge for showing them mercy, vowing not to go back to crime.