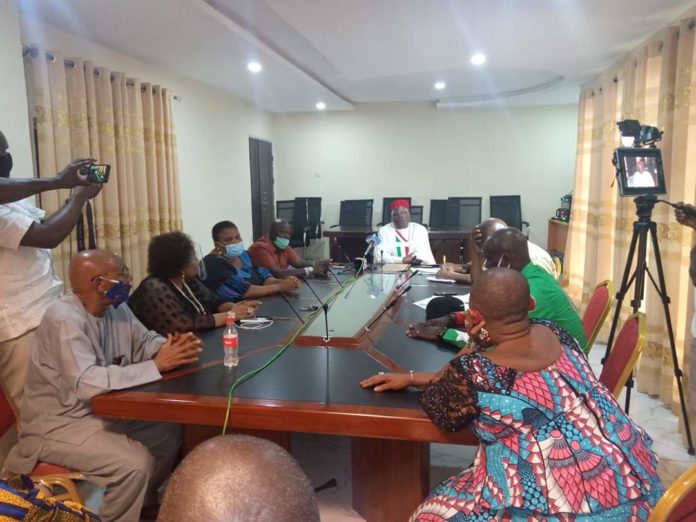 The Southeast Zonal Working Committee of the Peoples Democratic Party (PDP) has warned the Chukwudi Umeaba faction of the PDP in Anambra State, to close the state party office they opened in Awka and partner the Ndubuisi Nwobu leadership to move the party forward in the state.
The warning was contained in a resolution issued by the ZWC after an emergency meeting it held on Friday at its zonal secretariat in Enugu, signed by the National Vice Chairman, PDP Southeast, Austin Umahi and the Zonal Secretary, Casmir Ugwu.

The Anambra PDP has in recent times been plagued with an internal crisis which had resulted in the sack of three principal officers of the party by the State Executive of the party led by Nwobu, for allegedly engaging in anti-party activities.
Among the expelled officers were the State Vice Chairman South, Emeka Obi, the Chairman, South, Marcel Anyiam and the State Women Leader, Callista Adimachukwu.

The trio had dragged the state leadership of the party to an Abuja high court earlier in June and among the reliefs they sought was to be reinstated as members of the party’s state executive.

The final straw was to be the creation of a factional executive of the party in the state by one Chukwudi Umeaba and the subsequent opening of a state PDP secretariat in Awka by same.

In the resolutions reached by the Zonal Working Committee of the PDP today in Enugu, the party stated its resolve to ensure that PDP wins the 2021 Governorship election in Anambra State.
It maintained that the PDP in Anambra State remains one united family under the leadership of Ndubuisi Nwobu and that the secretariat of the party at No 1 Dr Ezidiegwu Road, Udoka Housing Estate, is the only secretariat known to the party.

The resolution read; “We seize this opportunity to call on all fifth columnists within the party to toe the path of honour and join their paymaster in other parties, as we shall be prepared to enforce all disciplinary processes to smoke them out.

“The days of merchandising with Anambra PDP are over and done with because we are determined to take the party to the winning side.”
The resolution affirmed the expulsion of the three officers of the party in Anambra state, as according to it, ‘all constitutional processes were followed and presented to the zonal working committee in her meeting with Anambra PDP Exco.

It reiterated its position that the PDP is not zoning the governorship seat.

“While reiterating that our party is not zoning the governorship, we wish to commend all the gubernatorial aspirants of the party in Anambra for their matured politicking.
“We bring the assurances of our National Chairman of a level playing ground and the conduct of the most transparent primaries,” the PDP Southeast ZWS said.
It called on all party faithful, as a demonstration of loyalty to the party, to withdraw forthwith, all matters in court and avail themselves of the party’s internal conflict resolution mechanism, assuring that all complaints will be adequately attended to timely by the ZWC.