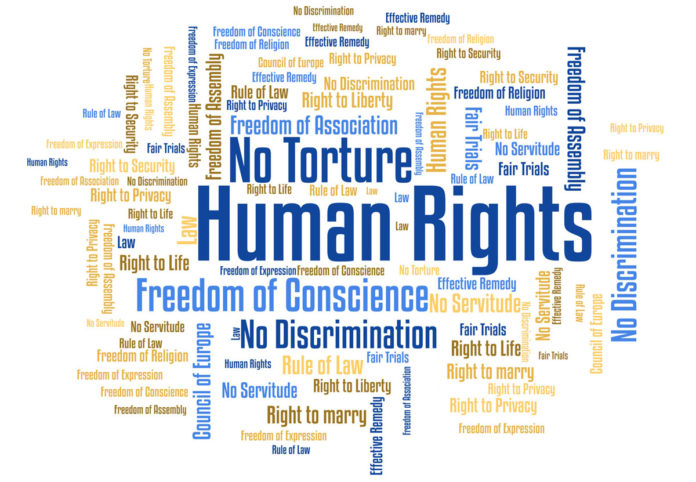 The Constitution of the Federal Republic of Nigeria, 1999 (as amended)-herein after referred to as the Constitution and the International human rights laws have guaranteed some rights for every citizen and every person respectively. Such as: right to life, right to dignity of human person, right to personal liberty, right to fair hearing, right to private and family life, right to freedom of thought, conscience and religion, right to freedom of expression and the press, right to peaceful assembly and association, right to freedom of movement, right to freedom from discrimination, right to acquire and own immovable property anywhere in Nigeria, compulsory acquisition of property (i.e. its limits) and the restriction on and derogation from those fundamental rights as well as Special jurisdiction of High Court and legal aid. While those rights are specifically guaranteed under Chapter IV of the Constitution, other international human rights laws have them provided in Articles. For instance, the African Charter on Human and Peoples’ Rights and the United Nations Universal Declaration of Human Rights, 1948. Provision of those human rights guaranteed under these laws are not just for fancy or camouflage rather, occasions in the past had justified their guarantee in our organic or Supreme laws for the purpose of safeguard. Victims and of course, past heroes of local and international communities had actually fought and paid with their lives and body through injuries when those human rights were not guaranteed, the situation which gave rise to those rights to be guaranteed in every Constitution of every country and in international laws as a matter of importance. Perhaps some of us in this present generation might wonder and query why those human rights are regarded as guaranteed rights and query at the same time, whether those rights were actually rightly or wrongly guaranteed?! I aim with this paper, to convince you that guarantee of those rights were actually justified, necessary and rightly guaranteed in the interest of humanity, protection, defence and justice.

The United Nations for instance, has made some days as ‘International Days’ for remembrance of some of those great men or victims and to commemorate the respect for rights of humanity and the civic duties of every person. Some of the most important days are as follows:

21 March-  International Day for the Elimination of Racial Discrimination.

25 March-  International Day of Remembrance of the Victims of Slavery and the Transatlantic Slave Trade.

27 March- Week of Solidarity with the Peoples Struggling against Racism and Racial Discrimination.

23 August- International Day for the Remembrance of the Slave Trade and its Abolition.

25 November- International Day for the Elimination of Violence against Women.

2 December-  International Day for the Abolition of Slavery.

Furthermore, as a way of commemorating and calling for the respect of human rights, the UNA-USA and the UN Human Rights Office (OHCHR) had, in the year 2017, partnered to promote the new “Stand Up for Someone’s Rights” campaign and the 70th Anniversary of the adoption of the UN Universal Declaration of Human Rights. The goal of the partnership was to empower a new generation of people to creatively amplify what they do in their daily lives to defend human rights, engage their decision makers on human rights, as well as to promote, engage, and reflect on the Universal Declaration of Human Rights.

The “Stand Up for Someone’s Rights” campaign was inspired by former First Lady and UNA-USA trailblazer Eleanor Roosevelt and her famous observation: “Where, after all, do universal human rights begin? In small places, close to home.” Launched by the UN Human Rights Office, the campaign is a reminder that human rights “start with each of us” and our communities standing together against intolerance, injustice and discrimination. At its heart “Stand Up” seeks to raise awareness about the essential role of human rights in people’s everyday lives, and encourages people to support the human rights of others, in their communities and with their decision makers.  In doing so, says the UN Human Rights Office, “local actions can add up to a global movement.” December 2017 will also kickoff a year-long campaign celebrating and honoring the 70th anniversary of the Universal Declaration of Human Rights culminating on International Human Rights Day in 2018.

Furthermore, while I am of the submission with humility, that ‘Fundamental rights’ are guaranteed under the Nigerian Constitution (for instance), ‘human rights’ are guaranteed under the international laws. Nevertheless, both fundamental rights and human rights are enforceable in Nigeria (for instance) using the Fundamental Rights (Enforcement Procedure) Rules, 2009. See: the Preamble to the Rules. Furthermore, it is my submission nevertheless, that human rights and fundamental rights do not mean the same thing in concept. The various concepts surrounding the nomenclature of the words ‘human rights’, ‘fundamental rights’, ‘legal/civil rights’, ‘enforceable rights’ and ‘unenforceable rights’ have been dealt with in the case of Uzoukwu v Ezeonu II (1991) 6, NWLR (pt. 200), p.708 at 760-761, where Nasir PCA thus ‘Due to the development of constitutional law in this field, distinct difference has emerged between ‘Fundamental Rights’ and ‘Human Rights’. It may be recalled that human rights were derived from and out of the wider concept of natural rights. They are rights which every civilized society must accept as belonging to each person as a human being. These were termed human rights. When the United Nations made its declaration, it was in respect of ‘Human Rights’ as it was envisaged that certain rights belong to all human beings irrespective of citizenship, race, religion and so on. This has now formed part of international law. Fundamental rights remain in the realm of domestic law. They are fundamental because they have been guaranteed by the fundamental law of the country; that is, by the Constitution. Some of the provisions are limited to the citizens while other provisions are applicable to all persons, citizens and aliens alike. This is the position in this country, in the United States, in India, and many other countries. It is a common ground that citizens and aliens alike enjoy legal rights, popularly called civil rights, some have been chosen and elevated to the level of Fundamental Rights and are protected and enforced under the Constitution. Other legal rights are themselves protected by law and many of them are justiciable. Such rights as the right to own property, the right to form clubs, the right to build houses, and so on, are legal rights which are justiciable and enforceable in the courts. There are other rights which may pertain to a person which are neither fundamental nor justiciable in the courts. These may include rights given by the Constitution as under the Fundamental Objectives and Directive Principles under Chapter 3 of the Constitution’. Also see: the case of Odogwu v A.G. of the Federation (1999) 6 NWLR (PT. 455) P. 508 Ratio 6 and the case of A.C.N. V I.N.E.C.(2013)13 NWLR (pt. 1370) 161 SC, the Supreme Court of Nigeria held thus ‘Without law and its rules regulating the enforcement and enjoyment of rights under the law, chaos will reign supreme, with every man pursuing and enjoying his real or perceived rights without regard to the rights of others, and organised society may come to an end’.

Finally, I am of the views that those guaranteed ‘rights’ under Chapter IV of the Constitution and under the international human rights laws were actually rightly guaranteed and should at all times be supported and up held by every person and government and non-governmental organization as well as the international communities. I myself and through my Non-Governmental Organisation too ‘STAND UP FOR SOMEONE’S RIGHT INITIATIVE (SUSOR INITIATIVE))’ (whose trustees are currently undergoing registration with the Corporate Affairs Commission of Nigeria) will forever raise voices for the safeguard of those rights at all times! Let’s all rise and stand up for our guaranteed rights and those of others in the interest of humanity!