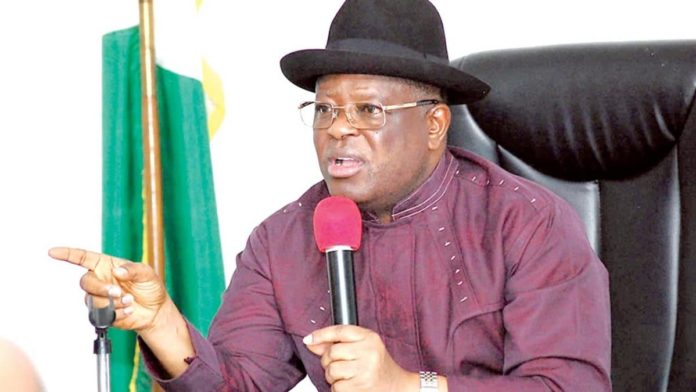 The chairman of the South East Governors Forum and governor of Ebonyi State, Chief David Umahi at the weekend denied plans of running a joint Presidential ticket with Governor Nasir El-Rufai in the forthcoming 2023 general election.

Umahi made this known in a press statement released by his Special Adviser on Media, Mr Francis Nweze in Abakaliki, capital of Ebonyi State.

He berated the originators of such campaign posters for trying to drag his image and that of the Kaduna state governor El-Rufai to mud, just as he warned them to refrain from bringing fake and uncalled for rumours that would soil his relationship with some northern governor’s.

The statement reads in part: “My attention has been drawn to an ill-conceived political poster that is currently circulating on social media, bearing the image of the Governor of Ebonyi State, Chief David Nweze Umahi as contesting for President of Nigeria in the forthcoming 2023 general election, with the Governor of Kaduna State, Nasir El- Rufai as his Vice Presidential running mate.

“The Poster bears the imprint of detractors and political desperados who thrive on gossip, rumours and have resorted to producing a smokescreen, where they attempt to drag the name of the Governor to the mud via the poster.

“One could not help but come to a sane conclusion that enemies of the state probably quoting the harmless expression of an Igbo born industrialist, Chief Cletus Ibeto who said “when it is time, we will send Umahi”, decided to stir the hornet’s nest and heat up the polity with such embarrassing poster.

“In as much as Governor David Umahi has towering credentials that in any contest makes him visible, he has not made public, any intention to contest for any position in 2023, let alone choosing a successor as he is a governor who is presently committed to delivering dividends of democracy to his Ebonyi people as he believes that politicking ends immediately after election.

“I, therefore, call on all lovers of good governance and the general public to ignore such posters as it is nothing, but the handiwork of mischievous elements who are determined to put the Governor against his admirers. 2023 is too far to start politicking now.”