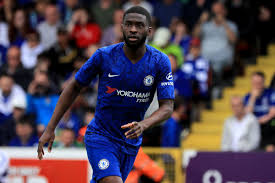 Chelsea’s rave of the moment Fikayo Tomori is open to the possibility of playing for Nigeria.

Tomori is also eligible to play for England, Canada and Nigeria.

The Chelsea Academy Graduate impressed against Liverpool nullifying the threat of Mohammed Salah.

“I am a citizen of all three (countries ) so we’ll see. I was born in Canada and lived there till I was about seven or eight months old. My family is Nigerian, and obviously, I live in England.

“It’s nice to have that. I can’t play Under – 21 football anymore so the last international break, I didn’t get called up to anyone. Next one maybe we’ll see”.

Tomori was born in Canada to Nigerian parents.

Chelsea coach, Frank Lampard has advised Tomori not to be distracted by his international future discussions.

Lampard said: “It’s his choice. I wouldn’t tell him where to play internationally.

But he’s played for [England] Under-21 and if he continues with his form and keeps improving then of course I would expect there to be potential for England if Gareth chooses to select him. He shouldn’t worry about it at the moment. He should just worry about how he’s playing every game or how he trains every day and that will be a nice problem for him, hopefully, if he’s eligible for three. He can chose which one he wants.”

Tomori played for Derby County in the Championship last season under Frank Lampard and he won the club player of the year award.