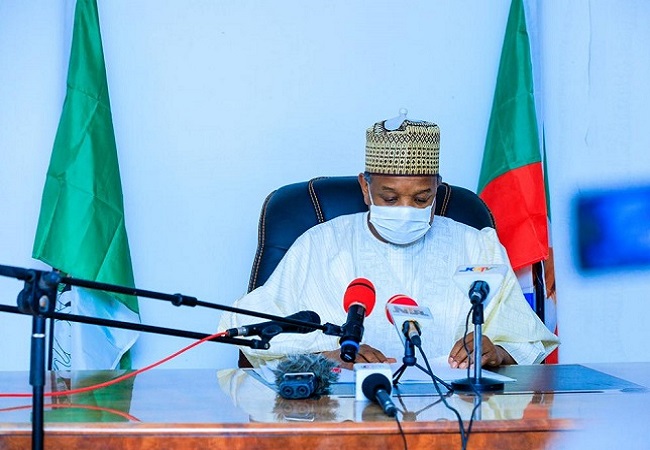 Governors elected on the platform of the All Progressives Congress on Friday said that the alleged threat by some members of the dissolved National Working Committee of the party to challenge their dissolution in court was a mere media creation.

The APC Governors operating under the umbrella of Progressive Governors Forum also said that the proposals made by President Muhammadu Buhari for the dissolution of the rancorous NWC have reduced distraction for the President.

Speaking to State House correspondents after meeting with the President, Chairman of the PGF and Governor of Kebbi State, Atiku Bagudu, explained that they were at the State House for a ‘thank you’ visit to appreciate what President Buhari has been doing for the progressive family.

He also said that the delegation was at the seat of power to introduce the Chairman of Caretaker/Extraordinary Convention Planning Committee, Mai Mala Buni to the President.

The PGF Chairman said that the President at the Emergency NEC demonstrated to everyone in the country that he will never sacrifice due process for expediency.

Asked why the delegation was at the State House, he said, “This is a thank you visit to Mr President. I have in the delegation the brand new Chairman of the All Progressives Congress Caretaker and Extraordinary National Convention Planning Committee, the Chairman of the Nigerian Governors’ Forum, member of the Caretaker and Extraordinary National Convention Committee, representing the North-Central, His Excellency, Alhaji Abubakar Bello, the Kogi State governor, Alhaji Yahaya Bello and myself.

“We thanked Mr President for all he has been doing for the Progressive family, which culminated in the visionary and momentous resolution of party disputes that took place on Thursday. Testimonials, news, commentaries, media from across the country are all happy for what has been done on Thursday.

“Equally, to appreciate all the gains that had been made under his capable, brilliant and visionary leadership. Our country is more food secured, the economy, though challenged by the Coronavirus pandemic and recovering from the 2016 recession, is doing better than most countries in a similar situation.

“Accountability has increased tremendously, we are hearing of security gains on a daily basis in all parts of the country and those are what Mr. President campaigned upon. Nigeria has one of the most robust responses to the Coronavirus pandemic, all because of his thoughtful imaginative and patriotic leadership.

“At the same time, we are here to introduce, yet again, the Chairman of our Caretaker and Extraordinary National Convention Planning Committee, who is a very seasoned administrator and politician, the governor of Yobe State, His Excellency, Mai Mala Buni, and to thank him on behalf of the Progressive Governors’ Forum for deeming it fit to include three governors in the committee: the Chairman, governor of Niger State and the governor of Osun State; Gboyega Isiaka Oyetola.”

Fielding questions on how the delegation was received by the President, he said, “He is happy that at last, we have one less distraction because Mr President is conscious of the mandate given to him by Nigerians. And even though he bothers a lot about his party, what dominates his daily actions are economy, security, transparency, and the progress of Nigeria. So he’s very happy.”

On the allegation that some members of the sacked NWC were contemplating to approach the court to challenge the dissolution of the executive committee, he said that it was a mere media creation as there was no such plan to drag the party to court.

He said, “Media says a lot of things, but Mr. President is very clear that he received due legal advice and remember, before the 2019 primaries, Mr. President demonstrated to everyone in this country that he will never sacrifice due process for expediency.

“Even when it was convenient to extend the tenure of the then executive so that we don’t have a convention and primary at the same time, Mr President said no, no matter how tough it is, we are going to do the correct legal thing.

“So, Mr. President will never do anything which the constitutional provisions of the party, let alone of the country, does not allow him to do.”