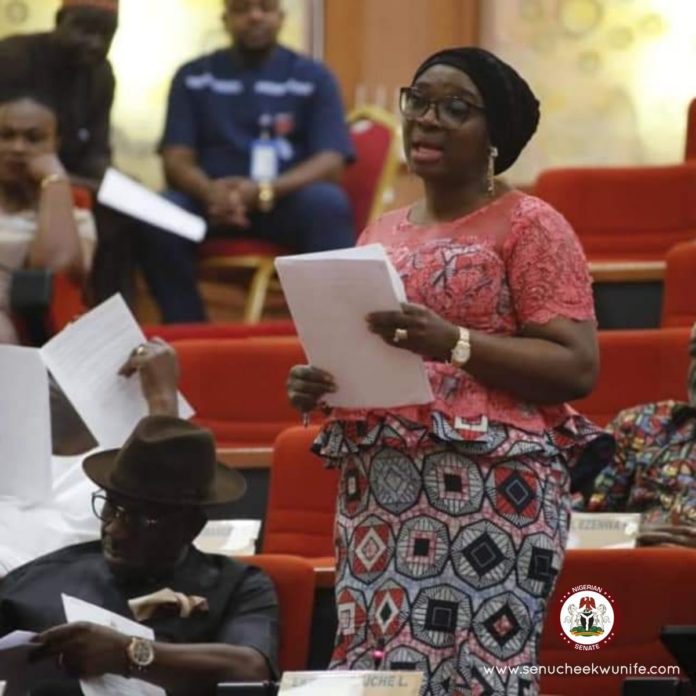 The Senator representing Anambra Central Senatorial District, Senator Uche Ekwunife has called for the amendment of the criminal code to provide for more stringent punishment for rapists.

Ekwunife gave the position while contributing to a motion during Tuesday’s plenary at the floor of the Senate.
Recent days have seen an increase in the incidence of cases and sexual violence with the latest being the murder and rape of an undergraduate, Miss Vera Uwaila Omozuwa at a Pentecostal Church in Benin City, Edo State.

Senator Ekwunife said rape damages the victims emotionally and physically, putting them in trauma which oftentimes, does not heal throughout their lifetime.

According to Senator Ekwunife, “while there may seem to be many reported cases of rape, the reported cases are only a fraction of the numerous rape cases that occur across the country and are unreported because the victims are either too scared to speak or are afraid of possible stigmatization.”

The Federal Lawmaker attributed the increase in incidences of rape to the absence of stringent punishment for rape offenders, calling for the amendment of the Criminal Code.
“I am aware of the provisions of the Violence Against Persons Prohibition (VAPP) Act which introduced innovative sections that criminalize rape and other acts of sexual violence but there is the need to review the punishments. If they are made more stringent, it will deter people from indulging in such. As a country, we are in a situation where if we do not handle this matter decisively, it may get out of hand,” She said.

She further tasked the Nigerian police to speed up investigation to fish out and punish those who raped and killed the UNIBEN undergraduate, Vera Uwaila Omozuwa.
“The perpetrators of this dastardly act must be brought to book. We must not forget that this is a young woman that was just terminated abruptly. This is dream shattered for the family. Her death must not go like that. The Police and other security agents investigating the matter should expedite action on the case and ensure that justice is not just seen to have been done but also done in the real sense of it,” Ekwunife emphasized.