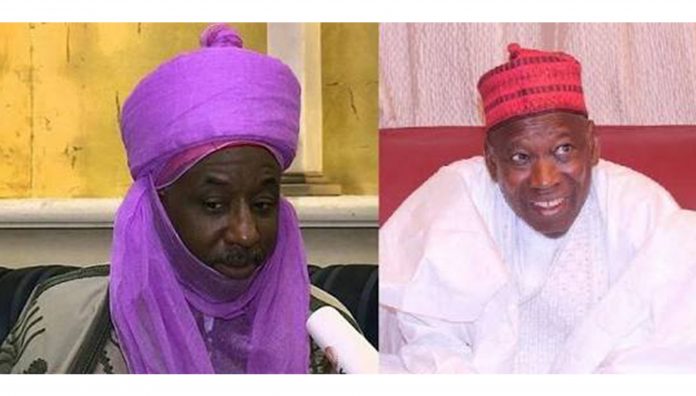 Governor Abdullahi Ganduje of Kano State appears to have thrown the cosmopolitan Northern state into a crisis all because of a seeming narrow political vendetta.

The state high court had on Wednesday declared the appointment and the installation of four new emirs by the Ganduje administrationt as null and void.

The four new emirs Governor Ganduje appointed in a seeming desperate bid to reduce the might of the royal father of the ancient emirate of the groundnut pyramid, were speedily given their staff of office following the recent controversial breakup of the Kano emirate.

The Kano Emirate Council, according to Wikipedia, was formed in 1903 after the British pacification of the Sokoto Caliphate. Ado Bayero became the emir in 1963, reigning for 50 years until his death in 2014, he oversaw the transformation of the Emirate under Nigeria’s federal constitution that subjects Northern Nigeria’s Emirates to political leaders.

The Ganduje show came on the back of a court order which restrained the All Progressives Congress (APC) governor from implementing the breakup of the emirate.

Ganduje, who was at the centre of a huge dollar bribe-taking, had signed a law that created four additional emirates in the state, leaving Muhammad Sanusi, the emir of Kano, with the control of 10 out of 44 local government areas in the state.

His Chief Press Secretary, Abba Anwar, in a statement on Monday, said the governor presented the instrument to Aminu Ado-Bayero, the eldest son of the late emir of Kano, as the emir of Bichi. The staff of office was also presented to Ibrahim Abubakar II, emir of Karaye; Tafida Abubakar-Ila, emir of Rano, and Ibrahim Abdulkadir, emir of Gaya.

According to the APC governor, “this Staff of Office represents dedication and commitment to serve your subjects in the areas of security, health care delivery system, education and environment among others.

“We, as a government, are always ready to work with you hand in hand for the growth and development of our state in particular and the nation in general. You should place greater priority on education, health and the security of your domains. As a government, we will always respond positively to your people-oriented yearnings and aspirations.

“As leaders who are closer to your subjects, you should join hand with government and other security agencies to make sure that security is not only improved but maintained. Efforts towards strengthening community policing, as practised globally, should form part of your commitment. Ours is to, together, ensure that global best practices are observed.”

While claiming that the new emirates were created in the state to reduce the burden on Sanusi, the governor also said that he presented appointment letters to the new emirs before the state high court issued a restraining order.

But the state high court has ordered a return to status quo pending the hearing of the suit against the appointment of the emirs.

Governor Ganduje is being accused of carrying out a personal vendetta against the Emir of Kano Muhammad Sanusi II in order to whittle down his influence in one of Nigeria’s oldest traditional institutions.

But the governor insisted the future of the state was taken into consideration before Kano Emirate was divided into five smaller units. ‘’For easier local administration as Kano state moves in a new direction to deliver community-based growth, we have decided to create 4 new Emirates for our great state’’,  he said the previous Friday, May 10.

A court order barring the governor from appointing and installing new emirs was issued by a state high court on Friday. But the state government claimed the order came after the persons appointed as emirs had accepted their appointments.

The state House of Assembly, the Attorney General of the state and the new emir – Tafida Abubakar-Ila, Ibrahim Abdulkadir, Ibrahim Abubakar ll and Aminu Ado-Bayero – are also named as defendants in the suit.