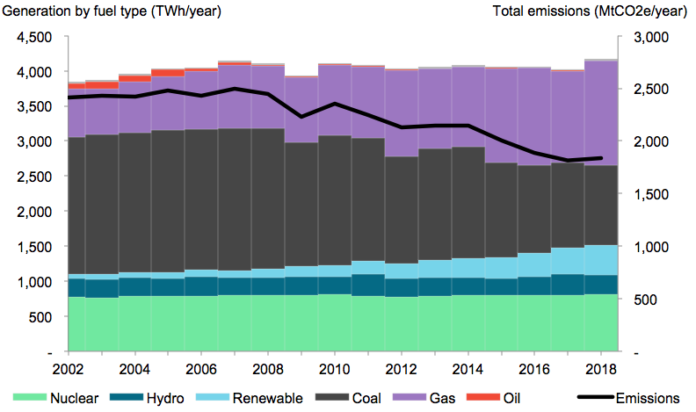 Low European gas prices and rising carbon prices have incentivised coal-to-gas switching in power generation, with Platts reporting that Germany’s and Italy’s gas-fired power generation has increased 54% and 37%, respectively, in 2019 to date.

In the second quarter of this year, global LNG supply totaled 87 mt, an increase of 13 mt or 17% over the second quarter of 2018, principally driven by new supply additions in the US, Australia and Russia. It was however, estimated that 2019 supply will be 365 mt, or 38 mt (12%), higher year-on-year as 2018’s supply additions continue to ramp up production and new projects begin production in the US and Australia.

The year-over-year decline in headline TFDE spot rates is primarily attributed to the low global natural gas prices referenced above, which limited opportunities for inter-basin LNG trading, start-up delays of new liquefaction projects, particularly in the US, as well as fleet growth. Despite these headwinds, 18 charters greater than 6 months in duration were fixed during the second quarter of 2019, compared with 20 in the first quarter and 24 in the second quarter of 2018. Poten currently estimates the one-year time charter rate for TFDE LNG carriers at $85,000 per day as compared with their headline spot rates of $60,000 per day, which may indicate a potentially tightening shipping market in the quarters ahead as customers look to secure their shipping ahead of the seasonally strong winter months and through 2020.

Stakeholders are expecting multi-month and multi-year chartering activity and shipping rates to increase from current levels during the second half of this year and into 2020, with the magnitude and duration dependent on the pace and location of demand growth, the continued ramp-up in new LNG supply additions and cooling and heating demand during the Northern Hemisphere summer and winter, respectively.

In 2021 and beyond, they are seeing a balanced market for LNG shipping relative to supply and demand for the LNG commodity. As at last July 11, the LNG fleet and orderbook (excluding Floating Storage and Regasification Units (FSRUs) and vessels with capacity below 100,000 cbm) stood at 498 and 109 vessels respectively, as estimated by analysts.

Of the LNG carriers in the orderbook, 63, or 58%, are chartered on multi-year contracts. There have been 25 vessels ordered thus far in 2019, including nine during the second quarter, and against a total of 63 for all of 2018, suggesting the pace of new build ordering has declined.