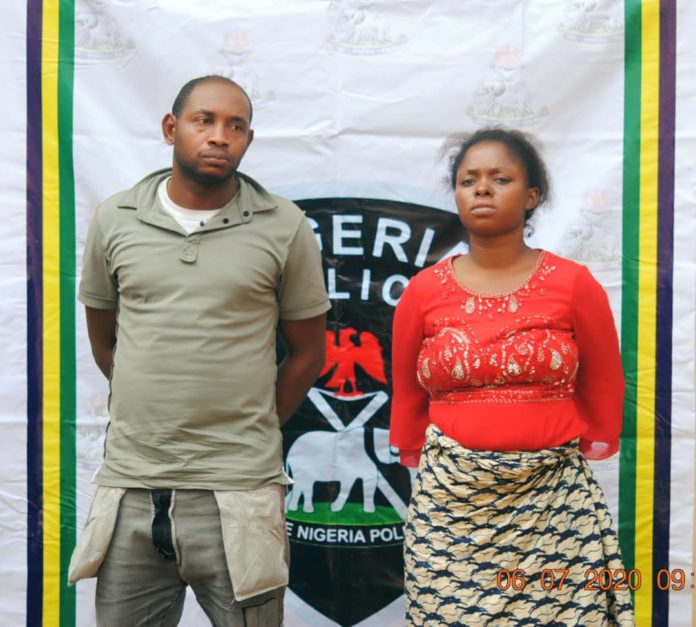 The Enugu State Police Command says it has charged one Ifeoma Ozougwu aged 24 and her husband, Jude Ozougwu to court for an alleged act of child abuse and inflicting of grievous bodily injuries on their minor female househelp, Nneoma Nnadi aged 10.

The suspects have also been remanded in the custody of the Nigerian Correctional Service for further proceedings.

The couple were arrested on the 2nd of July, 2020 for the act of violence on the minor which include using hot pressing iron, iron rod, nails and inserting substances into her private part.
A statement by the Police Public Relations Officer in Enugu, ASP Daniel Ndukwe Ekea said the Command had successfully paraded the suspects at the State Command Headquarters in Enugu.

“Parading the suspects before newsmen at the State Headquarters, the Enugu Commissioner of Police, CP Ahmad Abdulrahman reiterated the Command’s commitment to maintain utmost professionalism and ensure that justice prevails in all its dealings. He entreated public-spirited individuals, groups and organizations to always partner and support the Police in its quest to rid the State of crimes and criminality, especially those against the personality and fundamental human rights of children,” the PPRO stated.

The Command while expressing dismay over allegations by some individuals and organizations that the Police wants to compromise and sweep the case under the carpet, wondered why the Command, will stoop so low and derelict in its duties, especially in handling a case of such magnitude.

It expressed appreciation to the State Government as well as kind-hearted individuals and organizations of goodwill for their efforts at supporting and extending succour to the highly traumatized victim and her family.
“We specially thank and commend the Good Samaritan, who reported the matter to the Police and pursued it to the letter, for his exemplary show of courage and support, while urging other good citizens of the State to follow suit,” the statement read.