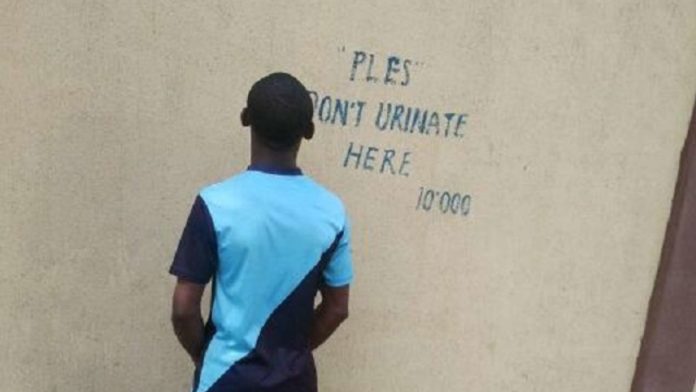 There are certain medical conditions that Nigeria should never worry about. One of such is paruresis, a phobia for urinating in the presence of others or in public places. It’s almost inconceivable that such a condition exists in the first place. But, it does and is a type of phobia in which the sufferer is unable to urinate in the real or imaginary presence of others, such as in a public restroom. The analogous condition that affects bowel movement is called parcopresis or shy bowel.

Here in Nigeria, urinating, or pissing as we prefer to call it, is like a fundamental human right, and like all things that come naturally, should be executed free of charge, when and wherever it comes calling. Even when you are not the culprit, you are confronted by the sight of others doing it.

Equally weird are stories of people being tried and fined in court for pissing in public. These Oyibo judges must be jobless to sit around and hear a case of someone caught watering the earth? To the average Nigerian, that is utter waste of time or, better still, simple wickedness on the part of the law. Sometime in May this year, I read in the UK Guardian that a judge in Somerset had ruled that peeing in public is not a nuisance if not seen by anyone. I couldn’t help laughing at the effort to logically and legally define an act which on this side of the globe is routine, like breathing.

Here, it is the person taking notice of someone peeing that is the nuisance.

A little boy says to his mother that he wants to “wee wee”; she, in full public glare, pulls down his shorts and tells him to pee. Next time, the boy doesn’t bother asking his mother. If he feels pressed in public, he simply takes down his pants and helps himself, regardless of the setting.

So, subsequently, you are driving in traffic on a street in any of our cities. All around is a beehive of activity: pedestrians hurrying on all sides, okada men meandering through the spaces, hawkers doing their thing. You are also bound to see someone – maybe even one well dressed to suggest a level of sophistication — stop by the road side, not even quite off the pedestrian path, unzip his trousers and produce his sprinkler. I have seen policemen urinating on the approach to the airport and at traffic junctions on our roads in Abuja. And you know Abuja is home to many visiting foreigners and dignitaries!

Regardless, you would see a man doing wee wee on the road, relaxed, very carefree, as though the rest of the world does not exist. He looks from side to side as if to confront anyone spying on his property and might even use his free hand to fetch his phone from his pocket to answer a call, all the while feeding the earth with the content of his bladder.

I am tempted to speculate that this is a male-only phenomenon but evidence proves otherwise. Perhaps, the sight of a female indiscriminately urinating presents an even more bizarre picture; the peculiar challenge it presents due to their anatomy, the public display of underwear and  the associated exposure of the otherwise revered privates to unknown eyes.

The fact is this; peeing is one call of nature that can distort the orderly functioning of one’s brain and suspend normal reasoning. All too often, we give up the natural aversion of exposing our privates in public when tested by this call. The pressure, coupled with the total dearth of decency and decorum among our people, has ensured that pissing in public has become a nuisance which we should seriously be worried about.

The issue goes beyond visual or aesthetic nuisance. The act pollutes the environment and threatens our health. We are familiar with the strong unbearable ammonic stench that emanates from those corners where people have urinated repeatedly. Inhaling such is hazardous. But there is more. It contributes to the overall poor sanitary conditions of our neighbourhoods, with attendant implications such as cholera.

Poor sanitation costs Nigeria N455billion each year (an equivalent of US$3 billion) according to a desk study carried out by the Water and Sanitation Programme (WSP). This sum is the equivalent of US$20 per person in Nigeria per year, or 1.3% of the national GDP. Perhaps a little more alarming is the information that the annual funeral cost due to deaths arising from poor sanitary conditions in Nigeria is estimated to be US$28.8m.

It goes without saying that we need to check this. Many professionals advocate that government spend more in providing public toilets, especially in rural areas, and that business and private premises must have adequate conveniences as part of their design for better human waste disposal.

While I do not disagree, I advocate that alongside such efforts, there is need for a national values reorientation and a campaign against public urination because, given the current state of affairs, even when you erect toilets, people will rather let piss rain on the walls.

Pissing in public is not a good thing!