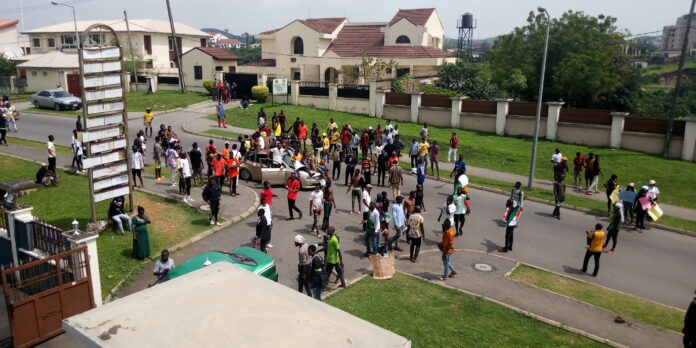 The ongoing nationwide #EndSARS protests turned bloody on Monday at Jimmy Carter Street in Asokoro area of Abuja as hoodlums attacked protesters who were taking cover at one J-Plus Plaza situated on the street.

The attack, which turned into a duel between the hoodlums and the protesters, resulted in one of the protester’s suffering a serious head injury. Also, the protesters destroyed several properties at the plaza including its gate.

Speaking with our correspondent, one of the protesters’ who narrated the ordeal, said: “It was a peaceful protest, we started at AYA although we met policemen at ECOWAS and they chased us with teargas, gunshots and we ran back to AYA roundabout, reunited and came to Powerhouse Junction where we saw armed touts with the police van by their them”.

“The thugs were running towards us so we had to run for our lives and we found ourselves inside a plaza just to hide but still they chased us to the plaza throwing stones at us. They destroyed the plaza, broke somebody’s head. The funny thing is that they attacked us twice at the plaza and the police did not do anything; not even pouring them tear gas but we peaceful protesters, they poured us tear gas. This is not Nigeria”.

An eye witness who is one of the occupants of the plaza said “some armed thugs attacked the protesters that ran here to hide. Obviously, they are Hausa boys who have been paid to attack the protesters. They have caused lots of havoc here”.

Another occupant said “what I witnessed here today shows that Nigeria is still very far behind. I don’t see any reason why these hoodlums are attacking peaceful protesters. What is more disturbing is the level of damage they caused in the plaza.

“They have destroyed the gate of the plaza and all the outside lights. They were stoning everybody including those of us who were not protesting”.

“The Nigeria government has continued to show that it’s not sensitive to the plight of the people. If these attacks continue, I am afraid of what will happen to this country”