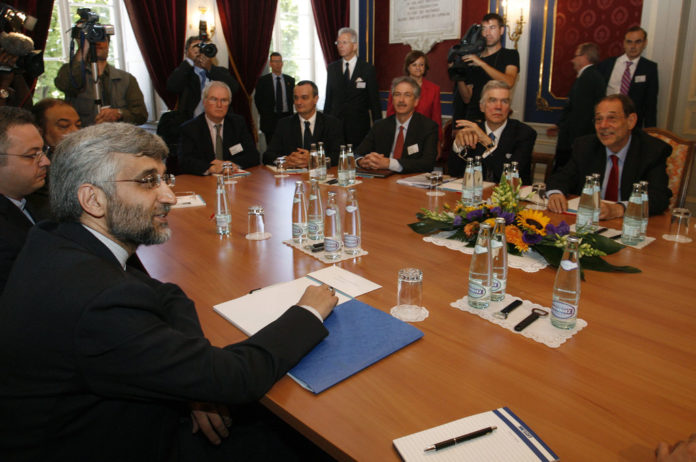 Diplomats from Germany, Britain, France, the European Union, China, Russia and Iran met in Vienna for talks on the 2015 Iranian Nuclear Treaty, a year after Washington unilaterally scrapped the agreement.

The meeting which held at the weekend ended in a stalemate as no agreement emerged on the central issue: the growing danger of a US war against Iran.

The previous week, amid an ongoing US military build-up in the Persian Gulf, US President Donald Trump announced that he had pulled back from launching air strikes on Iran that would have caused hundreds of deaths only 10 minutes before they were to begin the obvious Oil War.

On Friday, at the G20 summit in Osaka, he indicated that US war threats will escalate, declaring that “there’s no rush” to ease tensions with Iran, adding, “there’s absolutely no time pressure. I think that in the end, hopefully, it’s going to work out. If it does, great. And if doesn’t, you’ll be hearing about it.”

Analysts say it is clear that Washington’s unilateral scrapping of the 2015 treaty and its imposition of sanctions targeting Iranian exports were a prelude to a new US war drive. Prior to the Vienna summit between representatives of the remaining signatories to the 2015 treaty, Iranian officials warned that it was the “last chance.”

“I think this meeting can be the last chance for the remaining parties … to gather and see how they can meet their commitments towards Iran”, Foreign Ministry spokesman Abbas Mousavi told the Fars News Agency. He added that US sanctions against Iran “lack any legal basis” and are a “desperate” measure.

During the G20 summit in Osaka, Chinese President Xi Jinping starkly warned that the Persian Gulf, the center of the world’s oil supply, is “standing at a crossroads of war and peace.” According to China’s Xinhua news agency, Xi said, “China always stands on the side of peace and opposes war. All parties must remain calm and exercise restraint, strengthen dialogue and consultations, and jointly safeguard regional peace and stability.”

Xi’s statement came after his June 5 summit with Russian President Vladimir Putin in Moscow, where China and Russia vowed to “protect” their ties to Iran and “firmly oppose the imposition of unilateral sanctions” by anyone.

Nonetheless, despite the danger of all-out war across the Middle East, and potentially the entire world, under conditions where Iran and Russia are already engaged in a bloody eight-year proxy war against US-backed militias fighting for regime-change in Syria and Iraq, the Vienna summit failed to reach any deal.

“It was a step forward, but it is still not enough and not meeting Iran’s expectations”, Iran’s representative in Vienna, Deputy Foreign Minister Abbas Araqchi, said of the talks.

Araqchi said the sticking point was the EU’s refusal to defy crippling US sanctions on Iran’s oil exports that are strangling its economy. Araqchi criticized the Instex (Instrument to Support Trade Exchanges) institution set up in Paris by Germany, Britain and France to finance EU-Iran trade without using the US dollar. Up to now, the EU powers and European companies have refused to trade with Iran through Instex, citing fears of US retaliation.

“For Instex to be useful for Iran, Europeans need to buy oil or consider credit lines for this mechanism. Otherwise, Instex is not like they or we expect”, Araqchi said.

Even as it faces US trade war threats, China is defying US sanctions on Iranian oil and greeting Iranian oil tankers in its major ports. It is expected to import 200,000 barrels per day from Iran, according to industry estimates cited by the Financial Times.

Asked in Vienna whether China would obey Trump’s order to cut Iranian oil exports to “zero,” Chinese Foreign Ministry official Fu Cong said, “We reject the unilateral imposition of sanctions, and for us energy security is important … We do not accept this zero policy of the United States.”

The EU, Berlin, London and Paris are pursuing a different policy—capitulating to US threats and demanding that Iran take no action, even as Washington sends thousands of troops and an armada of warships to the Persian Gulf to threaten it.

In Vienna, EU diplomat Helga Schmid merely confirmed that Instex is “operational” before demanding Iran’s “full and effective implementation” of the 2015 treaty. She thus echoed demands this week from EU Council President Donald Tusk, German Chancellor Angela Merkel and French President Emmanuel Macron that Tehran abide by the treaty, even after Washington has discarded it and threatened to bomb Iran.

Araqchi rebuffed these calls, warning that Iran could act on its threat to restart uranium enrichment and make more than the 300kg limit on uranium specified by the 2015 treaty. “I don’t think the progress made today will be enough to stop our process, but the decision will be made in Tehran”, he said.

This statement reflects growing anger with the EU in Iranian ruling circles. After German Foreign Minister Heiko Maas visited Tehran earlier this month to demand that Tehran observe the 2015 treaty, while warning that Europe “cannot work miracles” in foreign policy, the Iranian press mocked him. “The impotent cannot work miracles”, wrote the daily Resalat, while the daily Javan caricatured him as an officer doing a Nazi salute and asked, “What was the point of his visit?”

The Vienna talks underscore the failure of whatever hopes remained, after nearly 30 years of bloodletting after the first US war against Iraq in 1990-1991, that rival capitalist governments’ diplomatic maneuvers can avert a new imperialist war in the Middle East. Instead, even broader disasters are being prepared.

Amid its continuing economic decline compared to powers like China and Germany, Washington is resorting more aggressively to its military to try to restore its former global hegemony. Yet a US war with Iran, a country with three times the population and four times the size of Iraq, would dwarf even the horrific 2003-2011 US occupation of Iraq, which left a million dead. After a decade of bloody proxy wars in Iraq, Libya, Syria and Yemen, such a war would even more rapidly move toward a global war between the world’s major nuclear-armed powers, threatening the survival of humanity.

The EU powers’ attempts to whip Iran into line with US demands do not reflect agreement with Washington’s Iran policy. Behind the scenes, US-EU tensions are surging. At a NATO defense ministers’ meeting Thursday in Brussels, when newly installed acting US Defense Secretary Mark Esper said he would tolerate no further actions from Iran, his French counterpart, Florence Parly, reportedly replied by demanding that Washington not involve NATO in military action in the Persian Gulf.

The EU powers plan to spend hundreds of billions of euros on a future independent European army, and Washington has sent repeated diplomatic communications in recent weeks threatening to cut off military cooperation with the European Union. Plans for an EU army are more and more clearly bound up with the rivalry between the United States and Europe over the trillions of dollars in oil money, critical positions on world markets and control of military bases at stake in the new round of imperialist wars of plunder that are being prepared.

Nevertheless, amid growing opposition from workers across Europe to police state policies and austerity measures intended to finance Europe’s military build-up, EU politicians are downplaying US war threats against Iran. Macron declared Thursday that he shares the US “strategic objective” in Iran, namely, preventing “Iran from getting a nuclear weapon.” He decried any Iranian moves to abandon the nuclear treaty.

Macron also contested Russian reports, backed by radar data, that the US drone shot down by Iran over the Persian Gulf was hit over Iranian territorial waters. He said the information available to French authorities indicated it was “in the international zone,” as alleged by Washington.

London had announced the dispatch of a hundred British commandos to the Persian Gulf to join the military build-up against Iran.