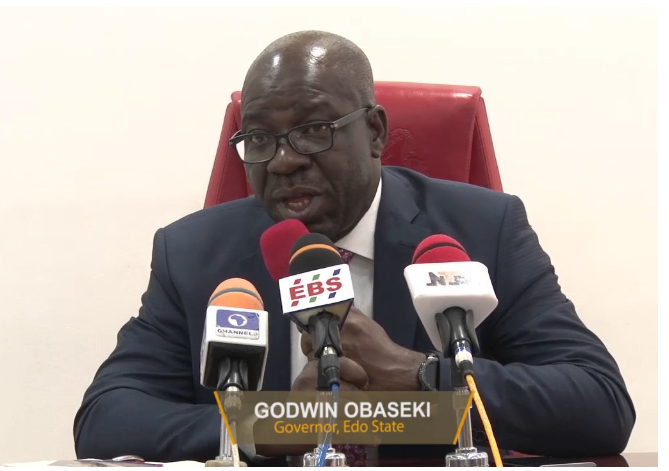 In a bid to address the demand of the End SARS protesters currently going on in Nigeria, the Governor of Edo State, Mr Godwin Obaseki yesterday with youths in the state.

The meeting attendants were mostly of the civil society members and the National Association of Nigerian Students.

After deliberations, the governor lifted the curfew imposed on the state.

The Governor said the move is to contain the activities of hoodlums who have hijacked the peaceful protests in a bid to end police brutality.

While briefing the youths in Benin on Thursday, he said the curfew will now be relaxed from 4pm to 6am daily for the next 72 hours for re-evaluation and further actions.

Meanwhile, the International Criminal Court has confirmed receipt of allegations of crimes against humanity perpetrated against peaceful protesters in the country.

Recall that the Socio-Economic Rights and Accountability Project (SERAP) had asked Mrs Fatou Bensouda, to promptly investigate reports of killings coming from Nigeria.

A statement issued by Fatou Bensouda, ICC’s Prosecutor, said it was monitoring the activities of law enforcement agencies in Nigeria over allegations of crimes.

Bensouda who called for calm and restraint said the court was looking out to confirm that Rome Statute crimes were being committed.

“My office has been closely following the tenets around the current protests in Nigeria and the reaction of Nigeria’s law enforcement and security agencies.

“Any loss of life and injury is concerning.

“We have received information alleging crimes and are keeping a close eye on developments, in case violence escalates and indications arise that Rome Statute Crimes may have been committed.”