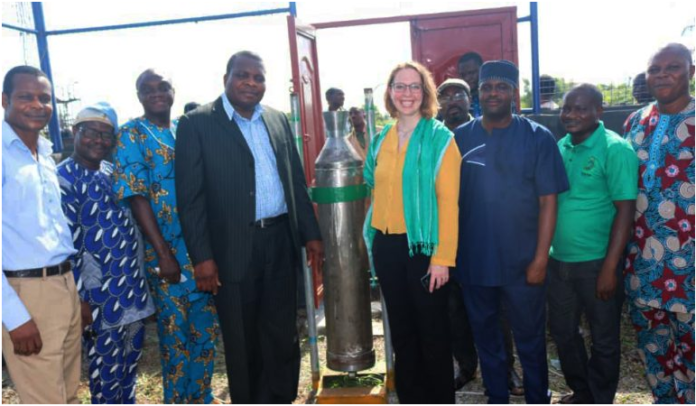 An Assistant Professor in the Frederick S. Pardee School of Global Studies, Dr, Julie Klinger, says Nigeria’s Space Research and Development Agency is one of 14 space agencies in Africa working to democratise access to outer space.

Klinger who is also an Associate Director of the Global Development Policy (GDP) Center’s Land Use and Livelihoods Initiative, and Faculty Affiliate at the Pardee Center for the Study of the Longer-Range Future  recently toured Nigeria’s Space Research and Development Agency including its Centre for Space Transport and Propulsion.

The research of this Associate Director of the Land Use and Livelihoods Initiative at the GDP Center at Boston University, focuses on the dynamics of global resource frontiers, with a particular focus on social and environmental sustainability.

In particular, she examines how diverse forms of violence and strategies for survival shape land use, environmental conservation, and livelihood security.

Some of her research experience includes rural development in the Himalayas; Brazil-China relations; the impacts of rare earth mining around the world; and the role of international outer space cooperation in global development.

Her research uses qualitative and quantitative methods combined with extensive fieldwork. She often works in local languages with diverse stakeholders to uncover the root causes of environmental degradation and livelihood insecurity.

She is committed to finding collaborative solutions to the most pressing sustainability issues of our time.

However, in 2005, the Olusegun Obasanjo administration approved a 25-year roadmap for Nigeria’s National Space Programme (Horizon 2005-2030).

The major highlights of the 25-year roadmap include training a Nigerian astronaut, the capability to manufacture satellites in Nigeria by 2018, development of propulsion systems, sounding rockets and a spaceport in Nigeria by 2030, among other goals.

Klinger toured the Centre for Space Transport and Propulsion and observed an engine test as well as rocket prototype construction.

The specific goal to develop Nigeria’s capability in rocketry, propulsion system and a launch site by 2030 was assigned to the Centre for Space Transport and Propulsion (CSTP), one of the six operational centres of the National Space Research and Development Agency (NASRDA).

The Centre is strategically situated along the Lagos lagoon in Epe, within the Lagos State University Engineering campus.

Aside from Nigeria, South Africa is another African country currently developing launch vehicles and propulsion systems.

Managed by Nigerian scientists and engineers, the goal of the program is to enable NASRDA to operate a spaceport with the capability to launch various satellites into Low Earth Orbit (LEO), Geosynchronous Equatorial Orbit (GEO), and interplanetary space by 2030.

Klinger specialises in development, environment, and security politics in Latin America and China in comparative and global perspective.

Her recent book Rare Earth Frontiers: From Terrestrial Subsoils to Lunar Landscapes (Cornell University Press in Fall 2017) received the 2017 Meridian Award from the American Association of Geographers for its “unusually important contribution to advancing the art and science of geography.”