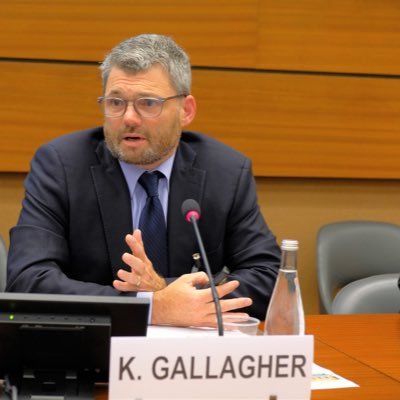 Gallagher is a professor of global development policy at Boston University’s Frederick S. Pardee School of Global Studies, where he directs the Global Development Policy Center.

He is the author or co-author of six books: The China Triangle: Latin America’s China Boom and the Fate of the Washington Consensus, Ruling Capital: Emerging Markets and the Reregulation of Cross-Border Finance; The Clash of Globalisations:  Essays on Trade and Development Policy; The Dragon in the Room: China and the Future of Latin American Industrialization (with Roberto Porzecanski); The Enclave Economy: Foreign Investment and Sustainable Development in Mexico’s Silicon Valley (with Lyuba Zarsky); and Free Trade and the Environment: Mexico, NAFTA, and Beyond.

Gallagher serves on the United Nations’ Committee for Development Policy and co-chairs the T20 Task Force on An International Financial Architecture for Stability and Development at the G20.

Gallagher has been a visiting or adjunct professor at the Paul Nitze School of Advanced International Studies at Johns Hopkins University, the Fletcher School of Law and Diplomacy at Tufts University; El Colegio de Mexico in Mexico; Tsinghua University in China, and the Center for State and Society in Argentina.

However, after outlining the dysfunctions of the current financial system, the authors propose a set of reforms.

Financial stability is a prerequisite for achieving the Sustainable Development Goals (SDGs) and commitments under the Paris Climate Agreement.

A value-driven and rules-based Global Financial Safety Net (GFSN) that fosters cooperative policy sovereignty toward these goals needs to be at the center of Group of Twenty (G20) policymaking.

The G20 has long supported “further efforts to strengthen the [GFSN] and promote a resilient international monetary and financial system, including by reconsidering elements of the IMF’s lending toolkit and deepening collaboration with regional financing arrangements (RFAs).”

To this end, the authors recommend urgent action. The G20 must expand and bolster the GFSN’s geographic coverage as well as the range of instruments to identify, prevent, and mitigate crises.

It must expand the thematic coverage of the GFSN to monitor volatile capital flows, pandemics, and climate shocks.

A stepwise, quota-based increase in resources for the International Monetary Fund (IMF), an expansion in the level and role of Special Drawing Rights (SDR), and new resources for new and existing RFAs will be critical to this expansion.

This renewed multilateralism will enable nation-states to pursue their own strategies to meet these broader goals in a globally coordinated matter.

William N. Kring is however, the Assistant Director of the Global Development Policy Center, a university-wide center in partnership with the Frederick S. Pardee School for Global Studies.

He previously was the Assistant Director and Research Fellow at the Global Economic Governance Initiative (GEGI).

Prior to joining GEGI, Bill was a Senior Academic Researcher at the Center for Finance, Law and Policy. He received his PhD from Brown University in 2019 where he was selected as the Honorable W. Randolph Burgess Fellow in International Affairs (2013-2014).