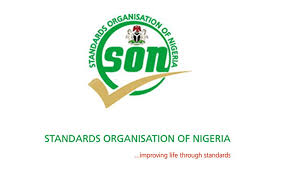 The Standards Organisation of Nigeria (SON) is currently making efforts to boost manufacturing in the country in a seeming frantic bid to smash the country’s rate of importation.

Apparently worried by the trend, SON is urging Nigerian importers to venture more into manufacturing to create greater wealth and job opportunities for the country’s teeming unemployed youths.

SON’s DG, Osita Aboloma, gave the challenge at a one-day sensitisation programme for importers and dealers of electrical and electronics products at the Alaba International market in Lagos, Nigeria’s commercial capital.

Aboloma who was represented by the Director, Inspectorate and Compliance, Obiora Manafa, an engineer, urged the importers to make efforts to establish manufacturing and assembling plants for the products to take optimum advantage of the huge market in Nigeria and the African continent, pointing out that such initiative will save the country huge foreign exchange expenditure and create hundreds of thousands of direct and indirect employment opportunities, since most of the imported electronics products can be out rightly manufactured or assembled locally.

Continuing, he advised the importers to adhere to the requirements of the relevant standards to make their products more competitive, particularly in view of the imminent implementation of the African Continental Free Trade Agreement (AfCFTA) and assured them of SON support towards seamless exportation through adequate conformity assessment programmes.

He then reiterated that electrical and electronics are classified as life-endangering products that can cause loss of lives and properties, urging the leadership of the Electrical Dealers Association to discourage their members from importing and stocking them as patriotic citizens.

According to him, the fight against substandard products is a serious one, which has landed many unscrupulous elements in trouble with the law to serve as deterrent to others, noting that SON has in its warehouse a huge consignment of substandard electric cables awaiting court order to be destroyed. These actions he said, are to reiterate SON’s commitment to bringing down the influx of substandard goods into the country

He called for greater collaboration between SON and the Market leaders to further sanitize the environment while assuring of EDAN’s commitment to self-regulation amongst its members.

SON experts on Product Registration, Ports and Borders operations, Laboratory Services and Inspectorate/Compliance made presentations on the various processes after which an interactive session was held to clarify issues and answer questions from the Alaba International Market operators.

SON is however, a member of the International Organisation for Standardisation (ISO). It was established by an Enabling Act Number 56 of December 1971 – the Standards Organisation of Nigeria cap 412 of the laws of Federal Republic of Nigeria, with a commencement date of January 1, 1970, when the Organisation started to function.

While the Act has three amendments: Act Number 20 of 1976, Act Number 32 of 1984 and Act Number 18 of 1990, SON’s governing body is known as the Nigerian Standards Council. This is the Policy making body for supervising the administration and financial management of the organisation.

The Director General of SON is the Chief Executive whose responsibilities revolve around the day-to-day administration of the organisation within the broad guidelines approved by the Council.The agency’s mandate includes preparation of Standards relating products, measurements, materials, processes and services amongst others and their promotion at National, Regional and International levels; certification of products, assistance in the production of quality goods and services; improvement of measurement accuracies and circulation of information relating to standards.