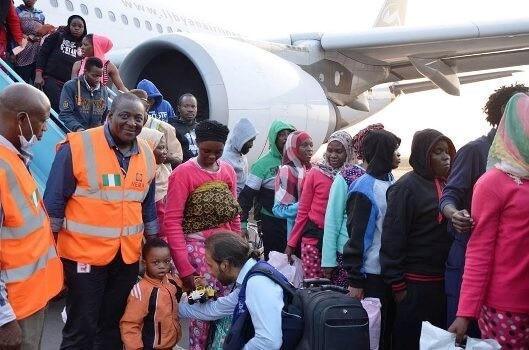 The National Emergency Management Agency On Friday welcomed a new set of stranded Nigerian Returnees from Libya. Mr.Ibrahim Farinloye the Acting Co-ordinator of NEMA in Lagos office received a total number of 168 returnees on behalf of the Director-General of NEMA. They were received at the Murtala Mohammed International airport Lagos at 6:00 am.

Mr. Farinloye, while quoting the summary of EU-IOM and the Federal Government Stated that among the returnees were 109 male adults, 38 female adults, six male children, 5 male children as well as 10 infants. This He said has brought the total number of returnees from Libya between April 2017 to date as 13,884 making Libya the country with the highest number of Nigerian returnees from 2017 to 2019.

According to Mr. Farinloye the distressed migrants going by the state of Origin shows Edo state as top on the list with 40.6%, Delta State 13.3% and Ogun state with 6.2%, other states made up the rest of the figure.

He also said that among the returnees were 31 males and 21 females who suffered a great deal of torture, while some minors were assisted back in males rating 66 and females 67.

He further said that those who were recorded to be kidnapped out of Nigeria but assisted back into the country were 110 (79 males/31female) while single parent males were 41 and 616 females. Farinloye also said that the pregnant women among the Nigerian returnees so far are 439 while some others returned with various medical issues. The total number of males with critical medical issues is 592 males and 804 females.

Migrants assisted back into Nigeria with psychosocial needs are 996, females 470 and males 523.