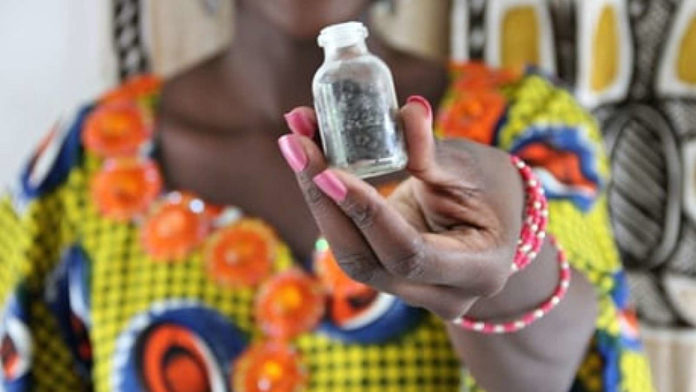 I first learned about Kayan Mata two or three years ago. Considering that l had lived virtually all of my life in the north, it came as a surprise to me that l never knew there was such a thing.

When translated literally, Kayan Mata means Women things. It is used by northern women to enhance love and intimacy. It is generally a mixture of herbs to make lovemaking enjoyable and keep the man asking for more. But from my discovery, there seems to be more about it than meets the eye.

Susan, my colleague at work, had mentioned It in the course of a discussion. She lived among Hausa women so she knew a lot about it.

‘What does it do?’ A curious me asked.

‘It does a lot of things. According to some of my neighbors who use it, it makes sex sweet. So the man doesn’t have to look outside. It also makes the man give them anything they want.’

‘Really? What is the Kayan Mata made of?’

‘They have different types so l cannot particularly tell you what each is made of but l can categorically tell you that the thing is jazz. There is one that my neighbor bought one time. They look like small sweets but has an egg in it. She said it was imported from Saudi Arabia. Whenever she wants to sleep with her man, she licks it like sweet. Then when the man is leaving, he gives her a lot of money. He does whatever she wants for her. She said the only reason she hasn’t told him to buy her a car is because, being a student, she doesn’t know how she will explain the car to her parents. Tell me, is that thing not jazz?’

My curiosity was further piqued so whenever I went to the market, I would go into one of those shops that specialized in Kayan Mata and just sit and observe while pretending to be window shopping. The things I saw seemed harmless on the surface. Sex sweeteners to enhance wetness, Vagina tighteners, even some creams to enlarge the butts and the breasts.

All the shops seemed to be selling the same thing. Little did I know.

‘Mallam na wetin be this?’ I asked one day, pointing at some small objects that looked like glasses.

‘This one? Na strong well well. If you wan meet am for oga, you go carry dis one and dis one,’ he pointed.’ You go pour am inside water. Wen dem melt, you go use am wash am for that place. Wen oga enter, e no go wan comot again,’ he smiled.

I told him I didn’t mind the cost.

‘No be this one o. That one different. If you want make oga dey give am for money, we get am.’

And he went into what I would like to call ‘the inner chamber.’ When he emerged, I realized there was Kayan Mata and there was “Kayan Mata”.

There were three bottles with funny labels. At least the ones I could read. Some of the labels were in a language I couldn’t read. One read, ‘Do as I say.’

‘Mallam, how dis one dey work?’

‘Yes, anything. But you go join am with another thing. That one dey for my oda shop. If you don ready, make I send make dem carry am come.’

‘No problem. Anytime you ready.’

‘What about this one?’ l pointed at the second bottle.

‘This one na oil. You go rub am for body after you baf. E dey bring luck. Man go dey dash you money anyhow. Oga fit sell himself carry the money give you. ‘

That made me laugh. The amiable mallam joined in the laughter.

Before l left, l learned that the business was good. Women were coming in droves. I had experienced it myself so I agreed. The Kayan Mata shops never lacked the presence of female buyers. The only reason why mallam had the time to attend to me was that we were in his smaller shop located in a secluded part of the market. He said he usually went there whenever he wanted to rest. He also told me that those samples he showed me, were usually backed by prayers. He didn’t say what the prayers involved though.

When I arrived home that evening, I went online to check on Kayan Mata. I got an eyeful.

Outrageous testimonies on Instagram by Kayan Mata users who testified that their stingy husbands or male friends, suddenly became generous after they had made use of many a product.

One Instagram post by one of the most popular Kayan Mata sellers on Instagram, who is said to have made millions from the business, testified that someone who was in jail, bought his girlfriend a jeep after she patronized her products.

I watched a video of her making a chicken broth which she claimed were for some prominent Governors wives. These women wanted to fortify their marriages against side chicks and taking that chicken broth was one of the most potent ways to make sure side chicks didn’t take their husbands away. The chicken was to be eaten alone. Bones and all. It was also supposed to be a chicken that had never lain eggs.

She also mentioned that there were secret ingredients that went into the preparation but because she wanted to protect her trade, she was not going to reveal those ingredients in the video. Bottom line is, the preparation is supposed to make your husband and his cash stick to you like glue.

I learned that the preparation is so potent that women who prepare it, only do it when they are sure you are married and you need it only for your husband. As preparing it for a single girl, could lead to the wreck of someone’s marriage.

One other video l watched was the instruction on how to eat something that looked like a sandwich. The seller said she had fortified the sandwich with a lot of herbs that were guaranteed to keep your man in your palms. It looked like an ordinary sandwich on the surface but wait for the instructions.

She clearly instructed that the sandwich had to be eaten by both partners. The female had to take a bite first, then the male until it was completely eaten. She warned that if the woman didn’t take the first bite, the efficacy of the sandwich would be neutralized. But once obeyed, the man was the woman’s to do with as she pleased. One is then left to wonder. If it is just an ordinary sandwich, why does it matter who ate from it first? Why does it matter that both partners must eat from it? How come an ordinary sandwich is enough to turn a man into a puppet In the hands of a lover?

How about the blue eye beads that are fortified (with only heaven knows what) to bring luck? They can be worn around the waist, ankle, neck or wrist. It is claimed that when worn, the wearer finds a financial favor with her lover.

And the Kayan Mata that comes with a padlock? The one that you call your lover’s name and say what you want him to do. After which you padlock some of the Kayan Mata and keep the keys.

Your lover becomes a toy in your hands to do with as you please.

Then there is the scarce, very expensive and effective Gindin Ayu which keeps your husband glued to only you for life. It is asserted that this Kayan Mata is so potent that even at the death of the woman, the man finds it difficult to move on sexually.

There is also one made with pigeons. It is also asserted that it helps to form a bond between spouses. A bond is also difficult to break.

Take a trip to Instagram and see the mind-boggling testimonies women share on how the use of a particular Kayan Mata gave them that much-needed trip abroad, bought them a duplex, a car, a contract and turned their lover into their Money Making Machine(MMM).

While the sellers and users of Kayan Mata would have you believe that those products are purely natural and devoid of any diabolic manipulations, I would like to think that any product that is capable of making a man act In a way that is alien to him, most times without the use of his senses, has more to it than meets the eye and should be questioned.

So what do you think? Is Kayan Mata jazz?