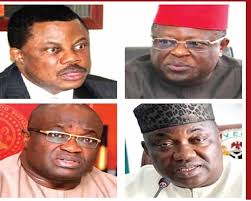 The five governors in the South-East geopolitical zone have been given a 14-day ultimatum to set up Covid-19 testing centres in their respective States that will allow for massive testing of their citizens.

According to the group, if the Governors remain adamant after the expiration of 14 days, they would be compelled to mobilize members of the human right community in the zone to protest the insensitivity and gross neglect of the people’s health.

The chairman of Board of Trustees, Dede Uzor Uzor, said the setting up of testing centres in each of the States in the zone has become imperative to determine the Covid-19 status of the citizens to avoid mass death.

He decried the indifferent disposition of the Governors in the zone towards procuring testing equipments that will enable them to set up testing centres at least in each State of the zone.

Stressing the need for massive testing of the citizens in the zone, HURIDE also berated the Governors for not providing the much-needed palliatives for the people, which has made the lockdown more difficult to enforce.

“If after 14 days of this call and they have not carried out this demand, we will call on their constituents to initiate their recall.”

The group warned that the welfare and wellbeing of the constituents who will determine their fate in the next election should not be taken for granted.