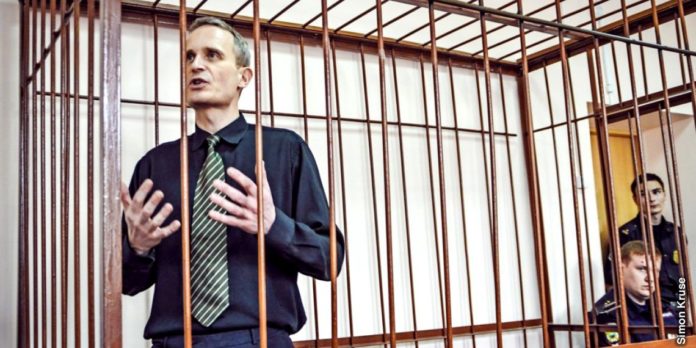 Human Rights Watch, a global rights group has called on the Russian authorities to immediately free Dennis Christensen, and stop wasting time and resources on his prosecution.

Christensen is being prosecuted on charges of “extremism” because of the way he allegedly practices religion as a Jehovah’s Witness.

Everything seemed to be in place for Christensen to leave a Russian prison in early July. A judge on June 23, paroled him, after he served half of a six-year sentence, while also ordering him to pay a 400,00 ruble ($5,714) fine.

The accused Jehovah’s Witness will now remain in custody until a court hearing on the appeal, which could be as late as August.

Human Rights Watch’s Deputy Director for Europe and Central Asia Division, Rachel Denber, says ‘’Russia has absolutely nothing to gain from the pointless, cruel, and abusive persecution of Jehovah’s Witnesses.’’

The rights group quoted one Bogdanov as saying that prison officials claimed Christensen had removed his prison jacket in the dormitory, which was very hot, and ate when he was not supposed to, both violations of prison rules.

‘’This is, of course, completely outrageous. This is no less outrageous than the original charges against Christensen’’, Denber says, adding, ‘’to put his outrageous prosecution and sentence into context, in Russia, grievous bodily harm draws a maximum eight-year sentence; kidnapping, five years; and rape, three to six.’’

Christensen’s alleged “crimes” were participating in discussions about a religious publication, helping organise worshipers to maintain the upkeep of their place of worship, and persuading people to worship with him.

The ruling declared the Jehovah’s Witnesses Administrative Center an extremist organisation, closed it, and banned the group’s activities.

‘’The ruling was a serious violation of religious freedom’’, Human Rights Watch says.

Christensen was the first person to receive an active prison sentence following this ruling. At least nine others are now serving prison terms for similar “crimes.”

More than 350 people in Russia are under criminal investigation for their involvement in Jehovah’s Witnesses activities, 24 of whom are in pretrial detention. Dozens of are ongoing trials.

In June, a court sentenced Gennady Shpakovsky to six and a half years in prison, the longest sentence handed to a Jehovah’s Witness so far.