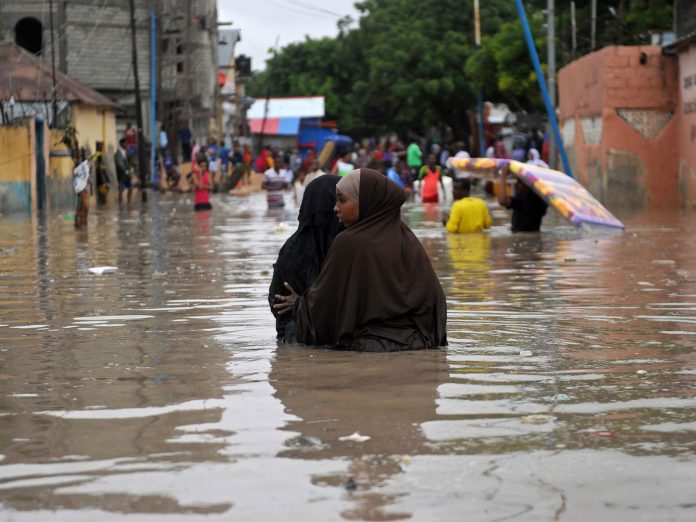 The war-torn Central African Republic (CAR) is being ravaged by flood that has already displaced around 30,000 persons with scores struggling to cope with the disaster of nature.

CAR has been mired in a brutal civil war since the 2013 ouster of President Francois Bozizé by a coalition of rebel groups. The militias have been fighting each other or the government, forcing around a quarter of the country’s 4.7 million people to flee their homes.

Last September, the United Nations estimated that two-thirds of CAR’s population requires humanitarian aid to survive. At the moment, the flooding has hit residents of Bangui, still recovering from six years of war, with yet another crisis in a fragile state with poor, if any, public services.

Leko Claudine has a sick child and is growing desperate. ‘’My daughter is suffering from malaria, and I do not have enough resources to care for her. Even to eat it is very difficult. We don’t have anything’’, she reportedly said, summarising the situation for too many crises-hit Central Africans.

For the past three weeks, heavy, unseasonable rains in Bangui continue to cause significant material damage, displacing around 30,000 people and exposing to further danger a population that has weathered repeated cycles of violence since 2013.

Like most of the displaced, Beatrice and her five children are being hosted by nearby communities, in her case neighboring Maya-Maya district, which is also partially affected by the floods. Her home has been under water for weeks.

‘’The situation is very difficult here’’, she said. ‘’The neighbors have sheltered us, but we lack everything, and we can’t sleep as there are too many mosquitoes due to the stagnant water. We have no income and our fields are completely flooded. We are afraid for the coming weeks.’’

Data collected by the International Organisation for Migration (IOM)’s Displacement Tracking Matrix (DTM) reveals close to 30,000 people forced from their homes by the severe weather are now living in host families, adding pressure on a population already suffering from violence and endemic poverty.

Several other parts of the country have suffered damage, the scale of which is only gradually being revealed.

IOM has provided 1,000 emergency shelters to internally displaced people. IOM, together with the Central African Red Cross, is currently evaluating the needs of those displaced by the floods but it is clear the delivery of basic health, water, hygiene, emergency shelter and household items remains a priority.

Last week, DTM carried multi-sector evaluations in the four affected districts of the capital, the majority of which have been partially flooded since rains began on 21 Oct.  The official number of people affected by the floods is expected to rise as the Red Cross, which oversees displacement site management planning, continues to register people living in displacement sites.

UN agencies such as UNHCR, WFP, WHO, UNFPA and UNICEF have already mobilized aid while international NGOs offer support for water, hygiene, sanitation and health needs.

The Displacement Tracking Matrix makes it possible to observe the movements of displaced persons, identify their main needs and make referrals for humanitarian assistance. IOM in the CAR plans to launch multi-sectoral needs assessments and a household evaluation.