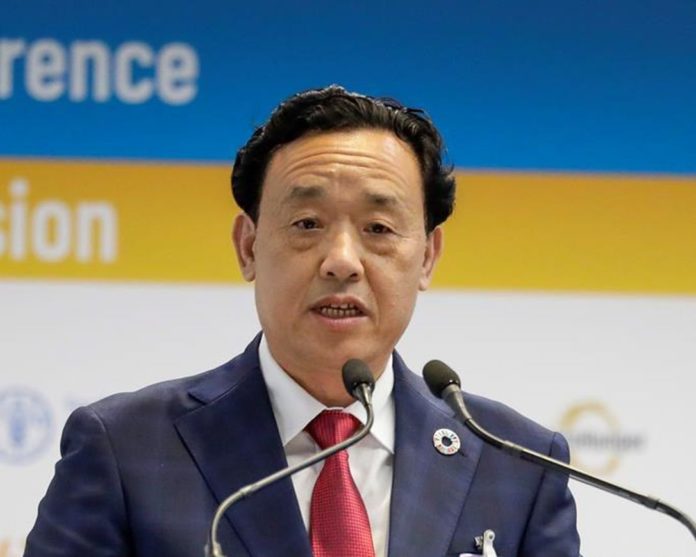 To address global food loss and waste which totals more than 1.3 billion tonnes a year, the Director-General of the Food and Agriculture Organisation (FAO), Qu Dongyu, says international co-operation and innovative, climate friendly technologies are critical.During a discussion on Enhancing access to innovation in agriculture to achieve the Sustainable Development Goals (SDGs) at FAO headquarters in Rome earlier, he said it was fundamental to support smallholder and family farmers by enhancing their access to innovation for sustainable food systems and to foster sustainable development.

“Innovation in agriculture is a way to enhance effectiveness, competitiveness and resilience with limited land and other limited resources”, Qu said. However, the FAO chief noted that smallholder and family farmers, especially those in small island countries and other vulnerable regions, are facing enormous challenges and often have difficulties in accessing agricultural innovation.

To remedy this, Qu called on research institutions and academia to seek new pathways to transfer their innovative outcomes to people who most need them, and also highlighted the need to promote new business models to make innovation accessible to millions of farmers, citing as an example FAO’s new Hand-in Hand Initiative.

Through “matchmaking” the initiative aims to support development efforts in the Least Developed Countries, Landlocked Developing Countries, Small Island Developing States, many of which are affected by food crises.

“The world needs to be able to feed itself. That is a really daunting challenge”, said Mark Keenum, President of Mississippi State University (MSU), in his keynote address to the participants. “It would take international organisations like FAO and the World Food Programme as well as countries, universities and academia crossing political, ideological and geographical boundaries to work together, to collaborate, to use open data, sharing knowledge and information.”

The event saw the participation of FAO experts, member-counties and academia, who discussed actions to improve access to innovation in agriculture to contribute to socio-economic growth, ensure food and nutrition security, alleviate poverty and support the achievement of the SDGs.

It was also noted that innovation does not necessarily come in the form of the latest technology and high-tech solutions. Innovation also means scaling-up existing, reliable solutions through international cooperation and multi-stakeholder engagement, or creating the enabling environment to ensure the transfer of innovative methods, technologies and solutions to those who are mostly in need of them.

At the event, the FAO Director-General referred to the proposed new Office for Innovation to strengthen FAO’s work in this field, noting that it will serve as an internal platform and reach out to members and partners. It will focus on integrating modern science and technology in all FAO programmes to achieve better results at headquarters and in the field.

This discussion built upon the themes of the earlier International Symposium on Agricultural Innovation for Family Farmers, which recognised the central role of family farmers in agricultural innovation.

FAO and Mississippi State University (MSU) started their collaboration in 2010.  The joint efforts focus on many different fields of research and development, such as animal and veterinary public health, fish health and capacity development for food security and nutrition.  Since 2014, MSU has also served as FAO-recognised Centre of Knowledge on Aquatic Animal Disease Diagnostics.  FAO looks forward to further expand the existing excellent collaboration.

He was addressing the High-Level Segment of the 31st Meeting of the Parties to the Montreal Protocol on Substances that Deplete the Ozone Layer, held at FAO headquarters in Rome.Cardinal Pietro Parolin, the Vatican’s Secretary of State, Inger Anderson, the Executive Director of the United Nations’ Environment Programme (UNEP) and Italy’s Environment Minister, Sergio Costa, also spoke at the event.“The Montreal Protocol is not only a successful environmental agreement that has helped the recovery of the ozone layer and contributed to the fight against climate change”, the FAO Director-General said. “It is also of great importance in protecting the food chain.”Qu noted that the Protocol is an excellent example of successful multilateral cooperation, driving collaboration between various international, regional and local actors from across governments, businesses, scientists and civil society.Around one third of all food produced for food consumption around the world is either lost or wasted. Food loss mainly occurs in developing countries where 821 million people still suffer from chronic malnutrition and also has an impact on climate change.“Food loss and waste contribute to climate change by generating nearly 8 per cent of annual global greenhouse gas emissions”, Qu said. “This is not only harmful to the environment but also to farmers’ incomes.”FAO is working with a broad spectrum of stakeholders and partners to tackle food loss and waste and a today’s event provided the opportunity for participants to explore sustainable solutions and better protect the earth’s ozone layer in line with the Montreal Protocol and its Kigali Amendment.The Director-General said plastic pollution partially generated by agricultural activity was another big challenge facing the world today.“More attention is needed to address the use of plastics in the agricultural value chain, especially in food packaging and the food cold chain”, Qu said. “We intend to collaborate with all partners in addressing plastics pollution in the agriculture and food sectors.” Qu said new technologies and innovative approaches based on a new business model were required.“We need to increase productivity and effectiveness based on innovation and good management and also promote digital farming”, the Director-General said.Reducing and managing the use of the ozone-damaging gas, methyl bromide (MeBr) has been among the initiatives adopted by FAO in support of the Montreal Protocol.Five years ago the FAO-based International Plant Protection Convention (IPPC) and the UNEP agreed to work together to discourage the use of (MeBr) to combat pests and disease and support efforts to develop alternatives to replace it wherever possible. MeBr was added to the list of substances controlled under the Protocol in 1991.