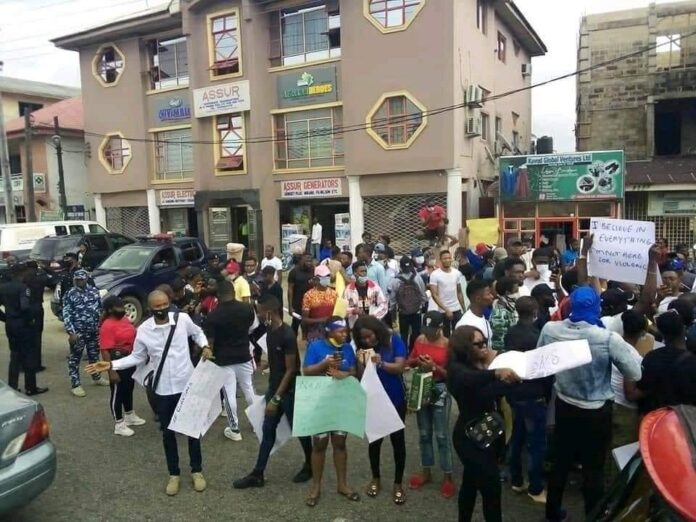 Starting from this Friday, October 23, aggrieved citizens in Cross River State have only two weeks to submit their petitions against abuses by law enforcement agents.

This is happening as the EndSARS protest in Uyo, the Akwa Ibom State capital took a violent turn with one person reportedly shot dead, many choice property and offices set on fire.

The violent turn forced the Udom administration to hurriedly impose a 24-hour curfew that will expire by midday this Friday.

Among the buildings touched and set ablaze are the imposing Anchor Insurance building in Uyo, near Ibom Plaza and the Access bank building located along Barracks Road.

EndSARS protesters in their hundreds marched around major streets in the capital city while blocking the popular Ibom Plaza which serves as a relaxation spot and an open mall.

Motorists approaching the plaza had to take alternative routes within the city, an ugly development that has been the practice since the protest began on Monday.

Our local roving reporter gathered that the protesters attempted to prevent a vehicle belonging to one of the security outfits from passing through the plaza when a protester was shot. An eye witness says the victim was rushed to a hospital by the protesters where died on the way.

Showing their displeasure, they took the corpse to the Government House, Uyo, but were repelled by the security forces.

Along the Barracks Road where the Government House is located, protesters started hauling stones and attacking government vehicles and private businesses. The Access bank building located along the road has been set on fire.

An eye-witness account in Uyo has it that the protest was generally peaceful before the protester was shot, leading to a reinforcement of security forces.

While many have identified with the aim of the protesters, others have expressed fears that the protest march has been hijacked by hoodlums and cultists. The protesters appeared to have been imported from other states to cause mayhem in the state

Information and Strategy Commissioner, Ini Ememobong, said the curfew was imposed to safeguard lives and property after violent manifestations of persons masquerading as #ENDSARS protesters created chaos in the state capital.

“This action is taken to protect lives and property of citizens and the restoration of Law and Order in our state’’, said, adding, “within the period of this curfew, there will be an absolute cessation of movement, except for essential service providers, who must show a valid means of identification.”

While the Udom Emmanuel administration is urging all law-abiding citizens to stay at home during the period of the curfew, Governor Ben Ayade of Cross River on Thursday inaugurated a judicial panel of enquiry headed by a former Chief Judge of the state, Justice Michael Edem.

The seven-man panel has swung into action immediately. The panel is investigating allegations of police brutality and restitution in the state.

Written petitions/memoranda are to reach the panel within two weeks in 14 hard copies and one electronic copy (soft copy). Submission should be made at the Office of the Attorney-General and Commissioner for Justice, and should be clearly addressed to the Secretary, Panel of Enquiry into Police Brutality and Restitution.