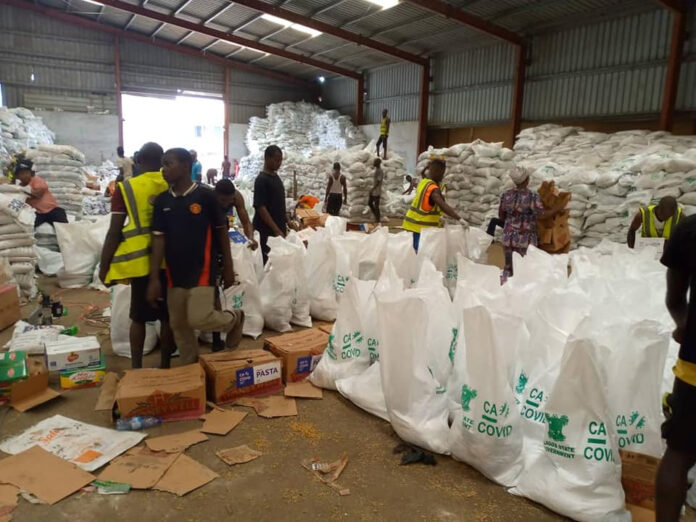 The ongoing looting of food items by hoodlums across Nigeria masquerading as EndSARS protesters tends to mirror the depth of hunger in the country.

In the 2020 Global Hunger Index, Nigeria ranks 98th out of the 107 countries with sufficient data to calculate 2020 GHI scores. With a score of 29.2, Nigeria has a level of hunger that is serious

Before the EndSARS protest, a non-governmental organisation, Food Aid International (FAI) had said that around 3,000 people die daily of hunger and poverty in Nigeria

A survey conducted by FAI claimed that out of the country’s estimated population of 130 million then, 14 million go hungry daily, with half of them being underfed.

UNICEF, a UN agency concerned with realising the rights of all children, and to help them build a strong foundation as well as have the best chance of fulfilling their potential says Nigeria has the second-highest burden of stunted children in the world, with a national prevalence rate of 32 percent of children under five.

The foregoing helps to explain why despite a 24-hour curfew announced by the Cross River State Government, hoodlums went on rampage across Calabar South and Calabar Municipality, that make up the state capital to loot public and private property and businesses.

Security men watched helplessly as some hoodlums using tricycles, taxis and other means of transportation ran riot around the peaceful city, shooting, looting and burning since Friday afternoon forcing residents to stay at home for fear of stray bullets.

The hoodlums are emboldened by a directive from Governor Ben Ayade that security agents mobilised to different locations in Calabar not to shoot at crowds that broke into some warehouses to take foodstuffs meant for distribution as palliatives.

All through the night of Friday, gunshots interrupted the peace of the night while around the 8th Mile axis of the city, it was an all-night of gun battle as residents keep vigils praying for dawn. By midday, Friday all the banks and most businesses in Calabar were shut down while Spar Mall has not been opened for public since Thursday.

Hoodlums invaded SEMA warehouse along Barracks Road and looted relief materials. Some of the items were marked CACOVID. Another warehouse storing relief materials was broken into along Murtala Mohammed Highway.

The private residence of Senator Gershom Bassey at Asari Eso was looted and another of his family building, from where he relocated to Asari Eso at Mayne Avenue by White House was burnt by the rampaging hoodlums.

They equally attacked the state Newspaper Corporation, publishers of The Nigerian Chronicle which shares fence with SEMA. All the phone shops along Calabar Road were attacked and looted.

The General Hospital, Calabar, along Mary Slessor Avenue was not spared just as the Niger Delta Development Commission (NDDC) branch office in Calabar was attacked and looted along with the Independent National Electoral Commission (INEC) office along Marian Road.

Governor Ayade’s media aide, Christian Ita, in a statement explains that his principal is sad at the ugly turn of events following the hijacking of the peaceful protest against police brutality in the state, pointing out that the state took delivery of the looted foodstuffs about two weeks ago, and were being distributed to the rural areas of the state.

But, from Anambra State, four out of the six truckloads of foodstuffs meant for four local government areas submerged by flood were attacked and vandalised by miscreants in Awka, the state capital.

Information and Public Enlightenment Commissioner, C. Don Aduba, in a statement says all six truckloads were not successfully hijacked by hoodlums who considered them palliatives for Anambra people to cushion the economic and nutritional effects of the coronavirus pandemic.

The local council areas on the banks of the River Niger submerged by flood as a result of the ceaseless torrential rainfalls since September are Ogbaru, Anambra East, Anambra West, and Ayamelum. The other councils strongly affected by the floods but not submerged, the Commissioner added, are Onitsha South, Onitsha North, Ihiala and Awka North.

He said the truckload for Anambra West Local Government Area was kept in Onitsha South council area because of a lack of access road; adding that the roads to the area are completely covered by water.

Executive Director of the Anambra State Emergency Agency (SEMA), Cyril Agupugo, explains that the food items will be sent by boats procured by the state government to the affected area

For the SEMA Chairman, Paul Odenigbo, ‘’flood victims in communities not submerged by the flood will receive theirs in due course. We did not exclude them from benefiting from the state government’s assistance. After all, the chairman of the Transition Committee of each of the LGAs has submitted the names of people displaced from their homes by floods. They will get theirs soon.

“Areas flooded but not submerged are not as many as those from fully submerged places for understandable reasons. The foodstuffs which left our warehouse today are the garri and Indomie noodles which were purchased about four days ago, though there are some which are leftovers from COVID-19 donations”.