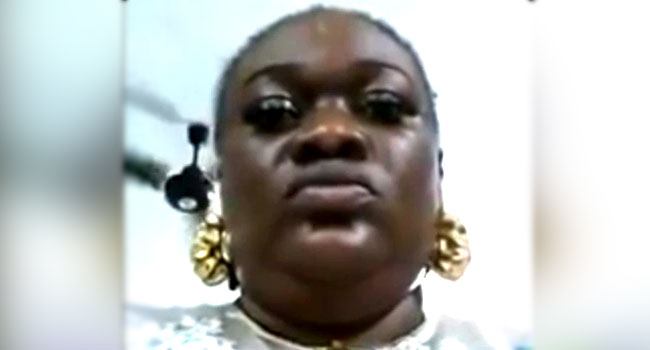 Deborah Okezie, mother of an 11-year-old student of Deeper Life High School, Uyo, Akwa Ibom State, says her life is under threat by the state Commissioner for Education.Deborah in a video alleged about the treatment meted to her son while in dormitory posting the boy’s pictures before he was taken to the boarding house and a few weeks after. The boy who was without any shirt in the video looked malnourished and traumatisedFollowing the video, Akwa Ibom State Government raised a probe panel headed by the Commissioner for Education, Enobong Mbobo, to investigate the alleged molestation of the student.Principal of the school, Ndidi Solomon, has since been suspended by the school management while the mother has continued to give an update on the investigation after her son has been hospitalised in a private health facility in Uyo, the state capital.In her latest video, she is alleging that her phone has been taken from her, and being allegedly intimidated and bullied by the commissioner.She is also alleging that the commissioner had gone in the night around 11 pm to see her son in the hospital, a development she frowned at, saying her son was still recuperating. She said she was tricked to attend the meeting to be bullied by the commissioner.“Commissioner, is it a lie, you did not go to the hospital by 11 pm, why did you trick me to your office to be bullied. You tricked me to bring my son to your office to be bullied. I got there and you started asking me about the video. You tricked me to your office to remove the video.“Just this morning, we got a call from the Permanent Secretary, Ministry of Education that we should come with Don Davies to the ministry. We told them that Don Davies was not okay, but they said the parents of the said boy were around, that we should come. We said Don Davies was moved to another hospital, they insisted that we must bring him and considering the fact that the governor’s investigation was going on, we brought him out.“On getting to the commissioner’s office, Deeper Life High School board members were seated as well as the parents and their friends, it was just me and my husband and Don Davies and my two children.‘’Before everybody, the commissioner turned to me and said , why did I go on a live broadcast to say that she went to hospital to see Don Davies around 11 pm . Do I know what that has done to her office and putting the governor’s name at risk? I said everybody saw what had happened. She said I should take down the video now.‘’I said excuse me Ma, is that why you brought me here. You said I should bring Don Davies here for questioning before other students, now you are attacking me, did you bring me here to attack me? She said I should take down the video now, they collected my phone from me.”‘’She said is there anywhere you can take down the video, I said madam, you cannot bring him here to intimidate me. Even if you want me to remove the video, we can do it one on one.’’Okezie who accused the commissioner of being biased because she insisted that the viral video must be first be taken down said the commissioner also wanted to know from his son what drugs were being given to him while in the hospital.“She is biased over the video I put on Facebook. She turned to Don Davies and said, “What did they do to you in your anus? Don Davies said they were “putting their fingers into his anus.”The commissioner asked what drugs he was taking but I told her that we did not come here to discuss drugs, disclosing that one of the parents flared and threatened to slap her in the presence of the commissioner.

“The man brought his belt so that he would beat me up. They pushed me and the children out of their office saying we should go”, she said“Nigerians my life is not safe, the investigation should be in a public place and not in a secluded place. My life is not safe. I have it on voice where she asked me to remove the video. They collected my phone from me. She never told me that she was going to attack me in her office. “Insisting that she has been a social media user before now, she said she was moved to turn to live video on the social media platforms to draw the attention of the school management to the plight of her son after all avenues to reach them failed.“All the messages I sent to the principal of the school, she never responded, Ndidi Solomon, I did not come on air because of Deeper Life High School, I did not come on air for the first time. This is something that touches me, I tried reaching you through your website but it was removed. This was the thing that pushed me to social media.”She also alleged that Deeper Life Church wants her to take off the video promising that she would continue to give Nigerians updates on the matter that has shocked many in the state.

In the mean time, the Deeper Life school has said it will not attempt to cover up any immoral act under any guise, following alleged molestation of a school boy at the school.

Education Secretary of the school, Mrs Thelma Malaka, is commending the concerted efforts of everyone who are showing support in the investigation, reiterating that the school will be transparent and that justice will not only be served, it will be seen by all that it had been served.

“We have suspended the principal of the affected campus and initiated an investigation into the matter. We decided to restrain ourselves from further comments after the first update because we thought it is sub-judice to comment on a matter currently under investigation.

“However, considering the potential impact of this issue, especially on what we stand for, we are compelled to provide an earlier update before the final report by the government”, she said.

According to her, the panel has sat and the school is presenting staff members and students who have been mentioned in this particular case all through the period of the investigation.

“We believe that the government will share the final report once the investigation is concluded. Deeper Life High School stands on the core value of integrity and uprightness and will not attempt to cover up any immoral act under any guise”, she said.

While Malaka enjoins the public to be on the lookout for the final report as it will be released by the appropriate authority soon, she points out that the school believes the government will share the final report once the investigation is completed.