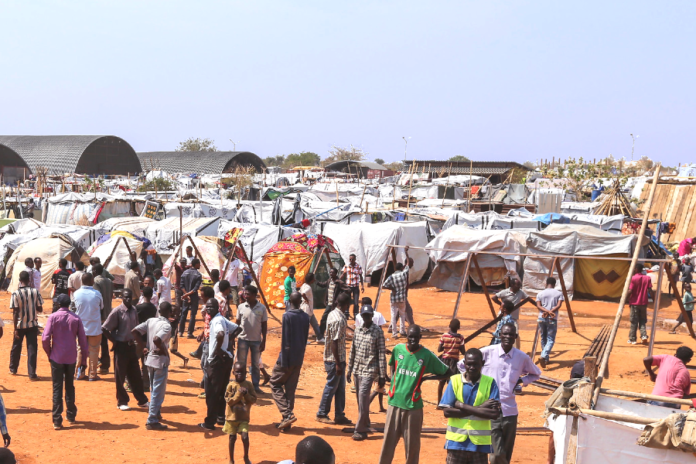 For millions of Internally Displaced Persons (IDPs) in North-East Nigeria, COVID-19 pandemic will have devastating consequences.

Throughout the volatile region, a majority of the IDPs live in overcrowded and underserviced camps.

Already, conflict-affected communities in the area are increasingly vulnerable to the COVID-19 pandemic as cases begin to be reported in Borno State.

Interestingly, the International Organisation for Migration (IOM) is supporting health actors to construct 90 quarantine shelters across Borno, Adamawa and Yobe States to decrease the risk of COVID-19 spreading in densely populated camps and host communities.

IOM Nigeria Chief of Mission, Franz Celestin, says “given the rapidly evolving situation in Nigeria and across the world, we must ensure that the health of displaced and host communities is a central part of our response.”

North-East Nigeria remains highly prone to cholera outbreaks, and other diseases such as malaria, measles, Lassa fever, meningitis and hepatitis E are endemic.

Lack of access to potable water and sanitation infrastructure increase the health risks of IDPs and returnees.

The UN Office for the Coordination of Humanitarian Affairs (OCHA) reports that around 35 per cent of medical facilities have been destroyed or partially damaged due to the conflict.

In coordination with health partners and emergency response agencies, IOM is constructing quarantine shelters to serve internally displaced and host communities in the towns of Gwoza, Pulka, Bama, Dikwa and Monguno.

These shelters will cater to people with travel and contact history who might have been exposed to the virus.

The quarantine shelters will consist of individual units with a latrine, shower, handwashing station and living quarters. Special provisions will be made for elderly groups and breastfeeding women.

Facilities also have a separate entrance and registration areas as well as restricted areas for health personnel.

According to the Nigeria Centre for Disease Control (NCDC), 1095 cases have been confirmed across the country as at 11.30 pm on Friday, April 24.

Figures released by NCDC indicate that Zamfara is the newest state to have reported a confirmed case in the last 24 hours.

The agency says at the end of business on the day, 114 new confirmed cases and one new death were recorded in the country.

Of the 1095 confirmed positive cases, NCDC explains that 208 cases have been successfully treated and discharged while 32 deaths have been recorded in 27 states and the Federal Capital Territory (FCT), Abuja.

NCDC gave the breakdown of the 114 fresh cases as coming from nine states with Lagos still recording the highest number of 80 cases, followed by Gombe with 21 cases, FCT – five, Zamfara and Edo states – two each, while four states -Ogun, Oyo, Kaduna and Sokoto- recorded one case each.

However, on April 18, the first case of COVID-19 was confirmed in Borno, the epicentre of a humanitarian crisis that has forced over 1.8 million people to leave their homes.

Ten years into a brutal conflict, a total of 7.9 million people need humanitarian assistance across the three most affected states of Borno, Adamawa and Yobe.

An estimated 40 per cent of the displaced populations reside in 298 displacement sites.

In 2019 alone, over 180,000 people fled following an upsurge in violence in the North-East. One in two camps in Borno are currently overcrowded, which heightens the risk of disease transmission for the nearly 700,000 vulnerable people living in such conditions.

The Humanitarian Coordinator in Nigeria, Edward Kallon, says “camp decongestion has been a challenge, but it is now a priority. I call on all stakeholders to urgently contribute to efforts being made to decongest camps in respect of people’s rights and dignity.”

To decongest camps, IOM is rehabilitating buildings to accommodate IDPs living in reception centres in Ngala town as well as relocating residents from overcrowded camps to new shelters in Monguno.

Since the start of the pandemic, IOM has been raising awareness among displaced communities on measures for preventing the spread of COVID-19 such as hand-washing and coughing best practices.

In more than 80 IOM-managed sites, hygiene promoters, including camp residents, have been disseminating information in line with physical distancing.

They conduct door-to-door household visits, airmobile speaker and radio announcements and host small group discussions with 15 people maximum sitting one metre apart from each other.

As part of its overall response to the virus and support to the Nigerian authorities, IOM will manage the new UN isolation centre in Abuja and repurpose two of its laboratories for testing, once tests become available, and case management.

The nine-month project for quarantine shelters in Borno, Adamawa and Yobe states is funded by the United Nations Central Emergency Response Fund (CERF).