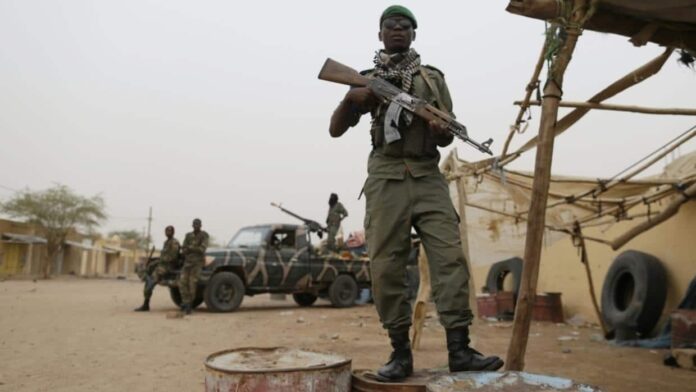 Tanks and military vehicles are moving round the streets of Kati, 15 kilometres from the capital, Bamako.

Government workers in the nearby capital of Bamako are evacuating.

“Arrests are being made of officials. It’s total confusion,” an officer at Mali’s Ministry of Internal Security, told journalists.

The development comes amid the intervention by the Economic Community of West African States (ECOWAS).

The body met late July but it appeared that the leaders did not achieve a sound commitment from warring parties.

President Keita also gave a brief on the socio-political situation and the disagreements that spiralled into violence.

The United Nations (UN), European Union (EU), African Union (AU) had condemned his government’s use of lethal force on protesters.

Jonathan is the ECOWAS Special Envoy to the Republic of Mali.

He briefed the president on the political situation in the West African country.

The meeting coincides with the reports of soldiers’ arrest of senior officers in an apparent mutiny.

Jonathan, who was in Mali from Monday to Thursday last week, recounted his meetings with the stakeholders.

They include political and religious leaders, Ambassadors of US, France, Russia, Germany, European Union.

But ECOWAS insists it cannot order a sitting president to vacate office.

“We told them that no international organization, including the African Union, United Nations and others, would agree with their position. We continued to emphasize the need for dialogue,” Jonathan stressed.

Buhari thanked Jonathan for “the stamina you have displayed” on the Mali issue.

He counselled further consultations with the Chairman of ECOWAS, President Mahamadou Issoufou of Niger Republic.