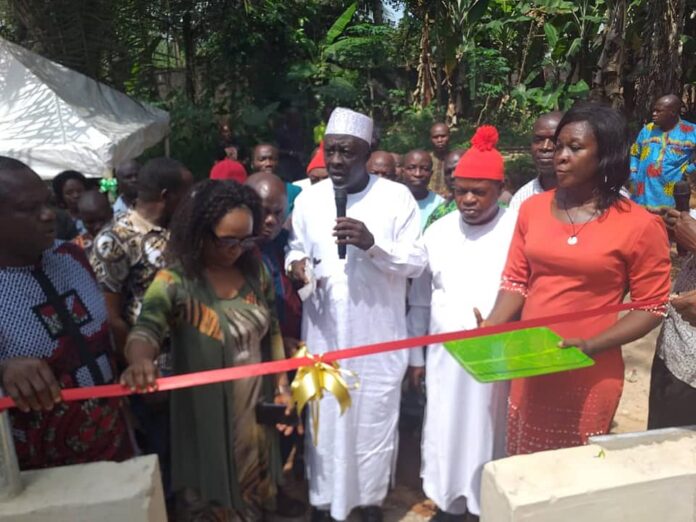 At the ceremony, the State Programme Coordinator of the IFAD, Assisted Value Chain Development Programme (VCDP), Mr Nnamdi Emmanuel Agwuncha, noted that the project was justified based on the role Uli Community is playing in the production of cassava.

This plan, according to him, would further help the youths and women to become breadwinners of their respective families, and equally contribute to the overall development of the community.

“Uli community has been a major producer of cassava in Anambra State, contributing a significant quotient to the cassava production capacity of Anambra State. There then arose the need to establish this facility to enable the exploration of the value chain of cassava for the benefit of the community and Anambra State,” he said.

A representative of the Monarch of the town, the Okosisi of Uli said he was highly impressed with the seriousness with which the project was executed.

He appreciated both the Federal and State Governments for expanding on the agricultural development of Uli, explaining that Uli had over one thousand hectares of land which the people used for cultivating cassava, rice, beans and yam.

He, however, observed that despite its huge capacity to cassava production, the community is still faced with a major challenge which is lack of a good bridge to access the said hectares.

In his words, “We passionately appeal to the government to construct a standard bridge for the community, to ease farmers’ troubling access to the land. Even during harvest, evacuating harvested crops is usually an uphill task and when they eventually bring the food crops out, it becomes expensive. So the government should look into constructing a standard bridge that will create access to these farmlands. This is a major way to further encourage more farmers into cassava production.”

The Transition Committee Chairman of Ihiala, Engr. Obi thanked the people of Uli for their hospitality whilst also appealing to the government for the provision of solar panels to help boost power and water supply at the site.

In response to this, the National Programme Coordinator of VCDP, Mr Garba Bala who also represented the Federal Ministry of Agriculture and IFAD, assured the people of Uli that solar panels would be provided by next week, stressing that the water supply would be constant and stable when eventually installed.

Mr Bala, however, urged those in charge of the initiative to ensure that women and youths were included in the production processes.

Some beneficiaries expressed sincere appreciation to Federal Government, the IFAD, Anambra State Government for facilitating the construction of the cassava processing site in Uli, assuring that the local farmers will form cooperative societies to enable them easily access government’s grants in future.