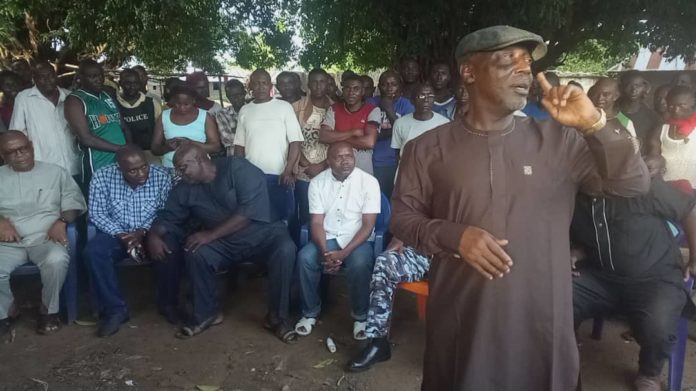 The Senator representing Benue South Senatorial District, Comrade Abba Moro, on Friday, paid a condolence visit to the people of Okokolo community of Agatu Local Government Area (LGA) in Benue State, over the recent attack unleashed on them, which reportedly left over 20 persons dead and many houses burnt.

Moro was accompanied by a former member of the House of Representatives, Rt. Hon. Samson Okwu and his Campaign Director, Hon. Yusuf Obioyi.

Agatu is one of the nine local government councils within the senator’s constituency, the Benue South Senatorial District.

Speaking during the visit, Moro who was sworn in on June 11 to replace former Senate President David Mark as the Benue South Senator, expressed his deep sympathy to the affected families and members of the entire community.

He stressed the need for the people of the various communities and villages in Agatu to live together in peace and avoid violence, noting that there can never be any meaningful development in an atmosphere of chaos, rancor and acrimony.

He vowed that as their representative in the Upper House of the Federal Legislature, he would continue to call on the government of the day to take decisive step to put an end to the senseless killings in the area. Comrade Moro equally promised to subsequently revisit the community to dialogue with the people and find a way of ensuring that the displaced persons return to their respective homes.

The head of the Okokolo community, Omadachi, who spoke on behalf of the council of elders, thanked Senator Moro for his show of love, concern and kindness towards the people.

While praying God to guide and direct Moro as the new senator of Benue South, he said members of the community were filled with joy in their hearts that despite the condition of their road, Moro still travel down to the village to sympathize with them.

The Agatu Council Chairman, Alhaji Alilu who was represented by his vice, commended the efforts of the senator and prayed for permanent peaceful solution to the problem in Agatu.

Moro had earlier in a statement condemned the attack immediately it occurred. Describing the action of the attackers as callous wicked and barbaric, he said: “To say I am shocked beyond words over the fresh attack on my people in Okokolo, Agatu is an understatement. This is unbelievable, unjustifiable and unimaginable. It bleeds my heart because nothing whatsoever justifies this unabashed act of mass murder and destruction meted out to the people of Okokolo in Agatu.”

The attack was reported to have been carried out by armed youths and militia from another village also in Agatu LGA.