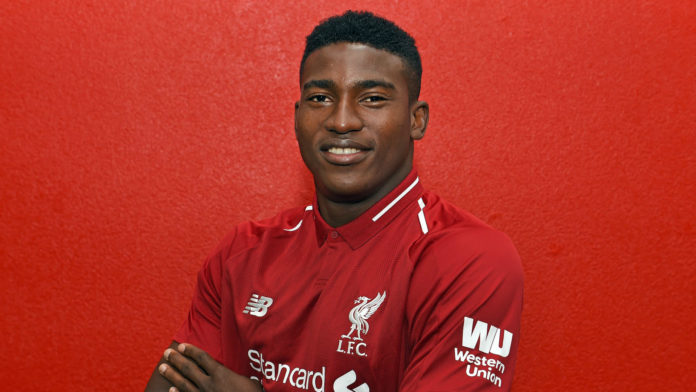 Dream Team VII attacker, Taiwo Awoniyi is not refusing to give up on his dream to make official appearance for current European Champions Liverpool.

The former FIFA U-17 World Cup winner signed for the Kops few seasons ago, but yet to make any appearance for the Club, no thanks to unending work permit controversy.

As a result, the Mersyside giants has loaned the youngster to FSV Frankfurt (Germany), NEC (Holland), Royal Excel Mouscron and Gent (both in Belgium before his latest move to Mainz in Germany.

Awoniyi finally opened up on the reasons he hasn’t been able to make his debut for the Reds years after joining.

He said : “I think the most important thing to say about that is that even Liverpool is even looking forward to me to get the work permit that will make me eligible to play in the EPL.

“This was the reason they kept me. I had other chance to go to still stay in Belgium but the club wanted another adventure for me and so they asked me to secure a move to Germany probably a step further will enhance my chance of getting a work permit. It is suggested that once you can do well in one of the top five leagues in Europe it could enhance the prospect of playing in the English League.”

Awoniyi also heaped praises on Jugen Klopp, branding the German as the best coach in Europe, before revealing the pair discussion over his future with the Club.

“For me, Jurgen Klopp is the best coach so far that I have met in my career,”

“If not for an injury that I had during the Pre-season maybe Nigerians would have seen me on the tour of the United States with Liverpool in the pre-season but we had a discussion also and he talked quite good.”

“This was why I went to Mainz because it was where Klopp started there. It is like his home and he said Taiwo you can go there and make it your home too. He said hopefully I would get my chance there and that maybe in the next one or two years the work permit is given I could come back but if not I would have to move on with my career”.