The presidential candidate of the Peoples Democratic Party (PDP), Atiku Abubakar, on Monday played a video recording at the election petition tribunal where a Resident Electoral Commissioner, Mike Igini admitted that the electoral body would transmit election results with the use of smart card readers to the INEC central server.

Igini spoke with Channels Television shortly before the election was conducted.

Atiku’s counsel, Chris Uche, SAN, had tendered 48 combat discs and admitted by the tribunal as part of efforts to substantiate alleged rigging against the re-election of President Muhammadu Buhari.

Uche who led Atiku and PDP legal team at the Appeal proceedings, tendered the 48 video recordings through Mr. Segun Showumi, one of the media aides to the PDP presidential candidate.

During the play of one of the recordings, the INEC REC for Akwa Ibom State was emphatic when he told the Channels TV crew that the electoral body would surely use smart card to transmit election results into the INEC server.

However, under cross-examination by INEC led counsel, Yunus Usman, Atiku’s witness admitted that Igini was not the official spokesman for INEC.

In another video recording, played in the courtroom, INEC chairman, Professor Mahmood Yakubu expressed optimism before the election that the Commission would use the electronic system during the conduct of the 2019 general elections.

Earlier, the tribunal chairman, Justice Mohammed Garba had dismissed the objection by Buhari and the ruling All Progressives Congress, APC, to tendering and playing of the said video recording before the tribunal on the ground that they were not frontloaded.

Justice Garba held that both Buhari, APC and INEC are bound by the pre-hearing report they freely signed to the effect that documents to be tendered from the bar can only be opposed at the final address stage.

The tribunal chairman in the unanimous ruling also held that none of the four parties to the agreement can renege on any of the terms and, therefore, admitted the video clips as rendered by the two petitioners through their star witness.

Also, three witnesses Babagana Kukawa, Abana Pogu and Suleiman Mohamed Bulama from Borno and Yobe states had testified that voters in the two states were harassed, intimidated and threatened farmers to either vote for APC or risk being ejected from their farmlands.

In his evidence, Bulama alleged that the APC used soldiers to molest ,attack and injure some voters suspected to be sympathetic to PDP. He also alleged village and district heads were allegedly used to coerce the voters into voting for Buhari.

Meanwhile, the Presidential Election Petition Tribunal (PEPT) suspended sitting till Tuesday for lawyer to President Muhammadu Buhari to play video recordings where Chairman of the Independent National Electoral Commission(INEC), Prof Mahmoud Yakubu ruled out the adoption of electronic transmission of result of the last general elections.
The tribunal adjourned shortly after Buhari’s lawyer,Alex Izinyon (SAN) applied to be allowed to bring his equipment to play a video Compact Disc (CD) which, he said, contains an interview recording of the INEC Chairman, saying electronic transmission of results was no Longer possible.
Izinyon’s application was informed by the objection raised by petitioners’ lawyer, Chris Uche (SAN) to the use of the CD player and television set (brought by the petitioners) to play the CD.
Earlier, Uche had, through the petitioners’ witness on Monday – Segun Showunmi – played some video clips where Yakubu and an INEC official, Mike Igini spoke about the possible deployment of electronic transmission of the elections results, using a central server.
While being cross-examined by Izinyon, Showunmi said he was aware of an interview granted on February 6, 2019 where Yakubu said electronic transmission of results was no longer possible.

Izinnyon then reached for a file on the table in front of him and brought out a CD, which he said contained the interview of February 6, 2019.

He indicated his intention to have the CD played to the hearing of all, including the witness, a gesture Uche objected to, insisting the Izinyon should provide his own equipment to play his CD.

“My lord, this are our equipment, pointing to the flat screen television and CD player. We brought them to play our CDs. They should bring their own.

“In digital world, there is what they call virus, that may affect our gadgets if the CD is played on it,”Uche said, following which Izinyon sought an adjournment till the next day to enable him fetch his own equipment. 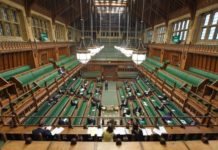