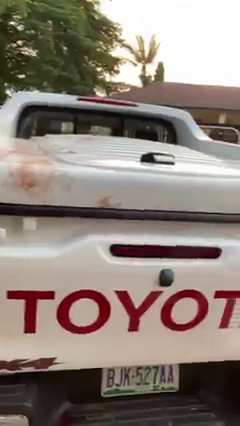 In the video, the recorder who claimed the incident took place in Ihiala LGA of Anambra State, showed a white Toyota Hilux, with Kogi registration number, BJK-527-AA, with two dead male occupants.

He however did not specify the date or time of the alleged shooting.

In a reaction to the incident on Wednesday, the Anambra State Commissioner of Police, CP John Abang described the report as absolutely misleading with the tendency of creating tension and panic in the State.

“The attention of the Anambra State Police Command has been drawn to a trending video clip which has gone viral in the social media showing a white Toyota Hilux with registration number Kogi BJK-527-AA with two male occupants fatally injured in which the recorder claimed the incident took place in Ihiala LGA of Anambra State. The report which neither states the date nor time of the incident is absolutely misleading with the tendency of creating tension and panic in the State,” he said.

He said preliminary inquiry conducted by the Command revealed that the alleged incident took place at Awo Idemili community in Orsu Local Government Area of Imo state, but the victims were only rushed to our lady of Lords hospital, Ihiala where they were confirmed dead by the medical doctor.

Abang wondered why the recorder could not cross check his facts with the Police in such a sensitive matter before sharing on the social media, insisting that calls for victim support in accident or security related situations by social media users must be devoid of mischief of any kind.

“In view of the foregoing, the Command urges the public to disregard the misleading video report and further assures them of adequate Security protection in Anambra State,” he assured.