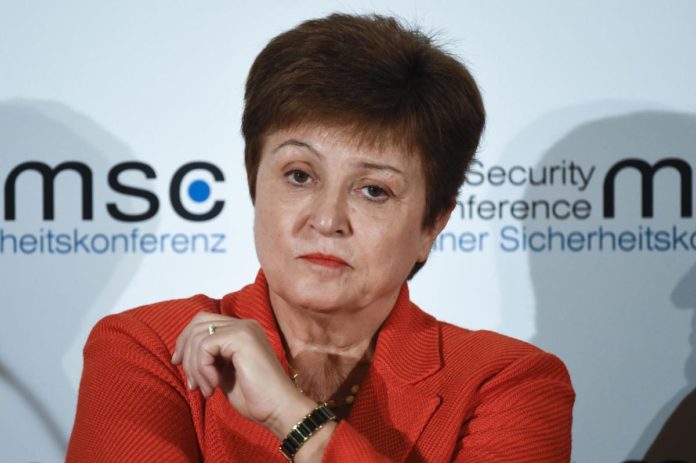 The unyielding coronavirus pandemic has driven the global economy into a recession.

Already, over 80 countries have appealed for emergency aid from the International Monetary Fund (IMF), to regain their balance.

IMF Chief Executive Officer, Kristalina Georgieva, who confirmed this development on Friday, says the pestilence has caused a global economic downturn that will require massive funding to buoy developing countries that lack the capacity to deal with a disease that has monumental health and economic consequences.

In an online briefing, Georgieva says: “It is clear that we have entered a recession”, that will be worse than in 2009 following the global financial crisis.

With economies of the world forced to lockdown, the IMF boss said; “the fund’s estimate for the overall financial needs of emerging markets is $2.5 trillion. We believe this is on the lower end.”

According to her, many countries are also activating internal mechanisms to cushion the scathing economic effects of COVID-19.

Last week, the Central Bank of Nigeria and the bankers’ committee agreed to back a N3.5 trillion stimulus package for the Nigerian economy.

The apex bank recently pointed out that it will support critical sectors of the economy with N1.1 trillion intervention fund.

The United States Senate has also passed a bipartisan $2.2 trillion emergency relief package by a vote of 96-0, as the coronavirus pandemic scorches the world economy, marking the biggest rescue deal of its kind in US history.

The Bank of England decided to cut interest rate to 0.1%, the lowest level since it was set up in 1694. This is in addition to GBP 330 billion packages to support small businesses, underwriting up to 80% of the salary of small businesses like restaurants, pubs that will be directly impacted by the lockdown.

Wage-earners, small business owners and low-income households are the most vulnerable during the three weeks lockdown in India.

Both US Federal Reserve Bank and Reserve Bank of India cut rates as an immediate step towards improving liquidity and supporting growth and hence, minimize the impact of coronavirus on their economies.

The United Arab Emirates boosted the size of its stimulus package to $34 billion as the second-biggest Arab economy seeks to fend off the impact of coronavirus.

The Dubai government announced an AED 1.5 billion ( $41 billion) economic stimulus package to enhance liquidity and cushion the potential impact of the current global economic situation caused by the onset of the raging virus.