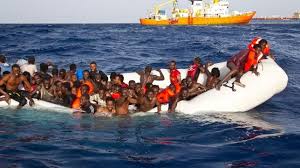 Fifty-nine Burkinabe migrants who survived a shipwreck off Kribi, Cameroon late July, have finally returned home. The migrants who flew out of Douala, Cameroon, were welcomed at the international airport in Ouagadougou by the International Organisation for Migration (IOM) and the government of Burkina Faso with support from the European Union.

The 59 Burkinabe were among 117 people, along with 32 Ghanaians and 26 Togolese, stranded in high seas after their boat ran out of fuel on 29-30 July, after departing from Cotonou, Benin.

After their rescue, Cameroonian local and administrative authorities together with local communities provided support to the destitute migrants stranded and enabled their access to basic services.

Following a request from the Consulate of Burkina Faso to IOM Cameroon, the stranded survivors who had no means to cover their return-related costs received voluntary return assistance. The shipwreck survivors from Togo and Burkina Faso also returned home on 12 September on a flight chartered by IOM under the Regional Direct Assistance Fund (RDAF) of the EU-IOM Joint Initiative for Migrant Protection and Reintegration.

The RDAF established in 2019 by IOM is a flexible and timely facility to address urgent and unforeseen protection and assistance needs of migrants stranded along migration routes in West and Central Africa and who originate from within the region.

“While the media tend to cover exclusively African migration to Europe, our data reveal that more than 70 per cent of migrants move within the West African region,” said Andreas De Boer, Programme Officer at IOM Burkina Faso. “These migrants face great vulnerability in the region. Return and reintegration assistance is essential to give them the possibility of starting over, and we commend the Government of Burkina Faso for its great commitment to addressing this issue,” he added.

In this instance, RDAF support included the transportation of the Kribi shipwreck survivors and provision of their temporary accommodation in Cameroon, medical and food assistance, and assisted voluntary return to their countries of origin. Reintegration assistance as well as medical, social and psychosocial support will be provided to Burkinabe returnees, including the most vulnerable returnees such as minors who will be assisted by UNICEF and Action Sociale.

The EU-IOM Joint Initiative for Migrant Protection and Reintegration funded by the European Union Emergency Trust Fund for Africa and implemented by IOM was launched in 2017 in 13 countries in West and Central Africa to assist migrants stranded along migration routes, including the Mediterranean routes.