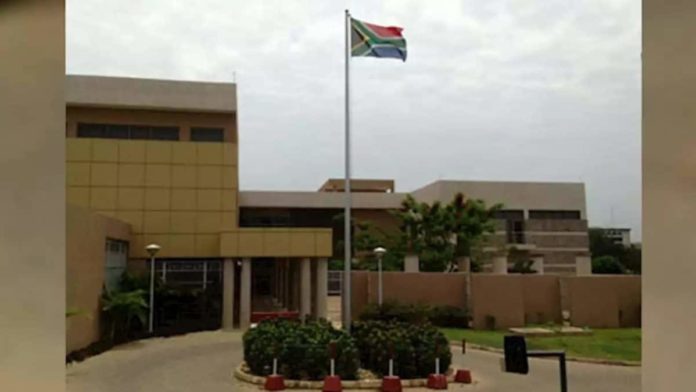 The South African High Commission in Nigeria has shut down operations.

This was reported on Thursday by eNCA, a South African media house.

It quoted the Department of International Relations and Cooperation’s Lunga Ngqengelele, as saying the decision was out of concern for the safety of employees of the embassy.

“We have been in communication with the Nigerian government and we have been assured of the protection of the businesses belonging to SA.

“Nigerian police quelled the uprising from the Nigerians attacking SA business, we understand that arrests were made. We are pleased that there was no loss of life,” he said.

There have been reprisal attacks in Nigeria over the xenophobia in South Africa.

However, the Nigerian Government on Thursday said it was not aware that the South African foreign missions in Nigeria has been shutdown.

The South African Foreign Affairs Minister, Naledi Pandor was reported to have said that the country had temporarily closed its embassy in Nigeria, adding that there was no plan by her country to pay compensation to those affected by the attacks.

She said South Africa was in constant touch with Nigerian authorities to try to restore calm.

However, briefing State House correspondents on Thursday, Foreign Affairs Minister, Geoffrey Onyeama said, “We are not aware that the South African government has closed down its High Commission here in Abuja or its Consulate in Lagos.”

The Minister insisted that the President Muhammadu Buhari administration must go ahead to press for compensation on the attacks and destruction of the businesses of Nigerians in South Africa.

He explained that “inviting Nigeria’s High Commissioner to South Africa would help the Nigerian government get the necessary information on the recent attacks on Nigerians in South Africa.”

Meanwhile, the Inspector General of Police, Mr. Mohammed Adamu, has said the 36 Nigerians arrested for allegedly vandalising businesses belonging to South Africans in reaction to the xenophobic attacks will be prosecuted.

Adamu said Nigeria is a country being governed by laws, describing those displaying such anti-xenophobic destruction as criminals and unpatriotic citizens.

He said the arrest was lawful and justifiable and was done to portray Nigerians as law abiding citizens before the global community.

The Inspector General of Police spoke in Ado Ekiti on Thursday during a security Stakeholders’ meeting held in Ado Ekiti capital city.

Defending the arrest, Adamu said: “the arrest showed that Nigeria is a country that has laws and it shows that we can never behave the way others behaved.

“No individual is allowed to take law into his hands. The Federal government is dealing with the issue of killings and attacks on Nigerians in South Africa.

“The fact that Nigerians are being attacked over there shouldn’t be a reason for anybody to attack the businesses of South African nationals.

“Those who did that are unpatriotic and they are criminals and that was why we arrested some of them and we will prosecute them”, he said.

Adamu added that the country’s policing system had been redesigned and rejigged to be community-based so that all Nigerians can see the issue of security as their responsibilities.

“Our strategy for policing has changed. The community is now working with us and we are going to ensure that all the communities are represented whether you are traditional rulers or you belong to any socio cultural group.

“We are going to train people from each community who will have the power of the police and power to arrest. They will be deployed to help the police in fighting crimes. When it comes to recruitment, we will come to your communities,” he said.

On why the police decided to interact with the stakeholders, Adamu said: “there are isolated cases of robbery, kidnapping and cultism in the southwest of recent and we believe the traditional rulers and the state governors must show commitment and we are ready to do anything to mitigate the security problems.

“We believe that if we all work together by way of robbing minds and share ideas, our society will be free of crimes.”

The IGP added that the government was seriously concerned about the welfare of the officers, saying “We have bought patrol vehicles and with the state of the earth technology that can checkmate crimes.

“We believe no officer should die in the course of fighting crimes. To this end, body armour have been procured to protect us while confronting the evil doers. If you kill one police officer, the government has lost the money spent to train such man”.

The Ekiti State police Commissioner, Asuquo Amba, said the police have been able to reduce crimes in Ekiti due to hardwork displayed by his men.

He said his command had also maintained robust and smooth collaborations with other sister agencies to maintain security of lives and property.

Speaking, the Chairman of the Ekiti State Traditional Rulers and the Alawe of Ilawe Ekiti, Oba Adebanji Alabi, said the commended the IGP and promised that the body will continually support the police to make Ekiti safe.